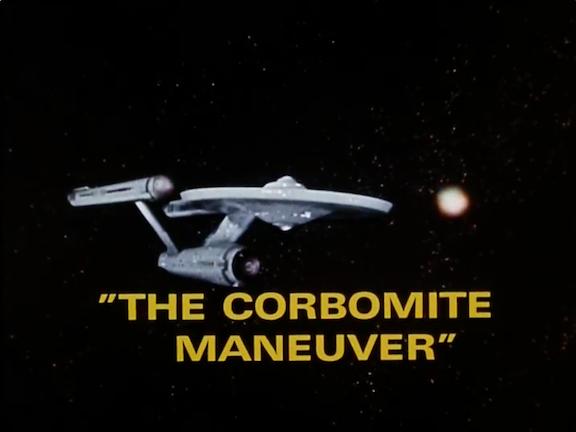 DIRECT LINK: For English click on the small head. It's the second option.

Star Trek is an American science-fiction television series created by Gene Roddenberry that follows the adventures of the starship USS Enterprise (NCC-1701) and its crew. It later acquired the retronym of Star Trek: The Original Series (TOS) to distinguish the show within the media franchise that it began. Space: the final frontier. These are the voyages of the starship Enterprise. Its five-year mission: to explore strange new worlds, to seek out new life and new civilizations, to boldly go where no man has gone before.

"The Corbomite Maneuver" is the tenth episode of the first season of the American science fiction television series, Star Trek. Written by Jerry Sohl and directed by Joseph Sargent, it first aired on November 10, 1966. In the episode, the Enterprise encounters a massive and powerful alien starship and its unusual commander. The episode has been well-received and frequently appears on lists of the best episodes in the series.

The USS Enterprise, commanded by Captain James T. Kirk, finishes a third day of star mapping when novice navigator Lt. Dave Bailey spots a large spinning multi-colored cube floating in space. He advocates attacking it with phasers. Kirk instead orders the ship to back away from the object. The cube pursues them, emitting harmful radiation, and Kirk reluctantly destroys it.

As Kirk is having lunch in his quarters, a gigantic glowing sphere approaches the Enterprise, filling the bridge viewscreen even at low magnification. Commander Balok identifies his ship as the Fesarius, the flagship of the "First Federation", explaining that the destroyed cube was a border marker. Balok ignores Kirk's greetings and announces that he will destroy the Enterprise for trespassing into First Federation territory and destroying the marker buoy. He gives the crew ten minutes to pray to their deities. First Officer Spock obtains a visual of Balok, a blue-skinned humanoid with constantly shifting facial features. Bailey succumbs to hysteria, and Kirk orders him off the bridge. Dr. McCoy rebukes Kirk, arguing that Bailey's outburst was a result of Kirk putting too much pressure on him, and pointing out that he warned Kirk of Bailey's condition ahead of time. The argument inspires Kirk to try bluffing Balok. He tells Balok that the Enterprise contains "corbomite", a substance that automatically destroys any attacker, and claims he has little regard for the fact that the Enterprise would also be destroyed in the exchange. While Kirk awaits a response, Bailey asks permission to resume his duties, which Kirk grants. Balok demands proof of corbomite's existence, but when Kirk refuses, he does not destroy the Enterprise. Instead, a small tug ship detaches from the Fesarius and tows the Enterprise deep into First Federation space, where Balok states he will intern the crew and destroy the Enterprise. Intuiting that the tug ship's tractor beam cannot be as powerful as that of the Fesarius, Kirk orders the Enterprise to engage the engines at right angles to their course. Just as its engines are about to explode from overload, the Enterprise breaks free. This apparently disables the alien vessel, as the crew picks up a distress call which its mother ship does not answer.

Though recognizing this may be a trap, Kirk, McCoy, and Bailey form a boarding party to render assistance. They beam over and discover that the "Balok" on their monitor was an effigy (creature design by Wah Chang). The real Balok, looking like a hyperintelligent human child, enthusiastically welcomes them aboard. He explains that he was merely testing the Enterprise and its crew to discover their true intentions. As Kirk and company relax, Balok expresses a desire to learn more about humans and their culture, and suggests they allow a member of their crew to remain on his ship as an emissary of the Federation. Bailey happily volunteers, and Balok gives them a tour of his ship.