Joshua Slocum (February 20, 1844 - on or shortly after November 14, 1909) was the first person to sail single-handedly around the world. He was a Nova Scotian-born, naturalised American seaman and adventurer, and a noted writer. In 1900 he wrote a book about his journey, Sailing Alone Around the World, which became an international best-seller. He disappeared in November 1909 while aboard his boat, the Spray.

From Dublin, he crossed to Liverpool to become an ordinary seaman on the British merchant ship Tangier (also recorded as Tanjore), bound for China. During two years as a seaman, he rounded Cape Horn twice, landed at Batavia (now Jakarta) in the Dutch East Indies, and visited the Maluku Islands, Manila, Hong Kong, Saigon, Singapore, and San Francisco. While at sea, he studied for the Board of Trade examination, and, at the age of eighteen, he received his certificate as a fully qualified Second Mate. Slocum quickly rose through the ranks to become a Chief Mate on British ships transporting coal and grain between the British Isles and San Francisco.

In 1865, he settled in San Francisco, became an American citizen, and, after a period of salmon fishing and fur trading in the Oregon Territory of the northwest, he returned to the sea to pilot a schooner in the coastal trade between San Francisco and Seattle. His first blue-water command, in 1869, was the barque Washington, which he took across the Pacific, from San Francisco to Australia, and home via Alaska.

He sailed for thirteen years out of the port of San Francisco, transporting mixed cargo to China, Australia, the Spice Islands, and Japan. Between 1869 and 1889, he was the master of eight vessels, the first four of which (the Washington, the Constitution, the Benjamin Aymar and the Amethyst) he commanded in the employ of others. Later, there would be four others that he himself owned, in whole or in part.

Sailing Alone Around the World 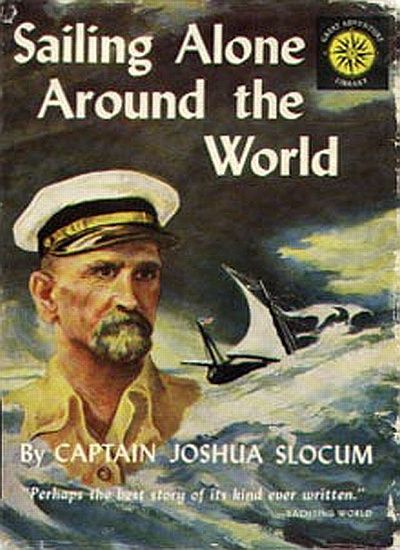