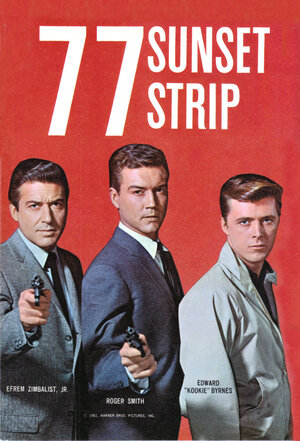 77 Sunset Strip is an American television private detective series created by Roy Huggins and starring Efrem Zimbalist Jr., Roger Smith, and Edd Byrnes. Each episode was one hour long. The show ran from 1958 to 1964.

The series revolves around two Los Angeles private detectives, both former government secret agents: Efrem Zimbalist, Jr., played Stuart ("Stu") Bailey, a character Huggins had originated in his 1946 novel The Double Take (which he later adapted into the 1948 movie I Love Trouble, starring Franchot Tone in the role). Roger Smith played Jeff Spencer, also a former government agent, and a nonpracticing attorney. The duo worked out of a stylish office at 77 Sunset Boulevard (colloquially known as Sunset Strip), between La Cienega Boulevard and Alta Loma Road on the south side of the strip next door to Dean Martin's real-life lounge, Dino's Lodge. Suzanne, the beautiful French switchboard operator played by Jacqueline Beer, handled the phones.

Comic relief was provided by Roscoe the racetrack tout (played by Louis Quinn), and Gerald Lloyd "Kookie" Kookson III (played by Edd Byrnes), the rock and roll-loving, wisecracking, hair-combing hipster and aspiring PI who worked as the valet parking attendant at Dino's, the club next door to the detectives' office. Byrnes had originally been cast as a contract killer in the series pilot, but proved so popular that he was brought back in a new role for the series.

Despite Huggins' hopes for a hard-edged drama, the tone of the series was much lighter and featured a strong element of self-deprecating humor. Many of the episodes were named "capers". The catchy theme song, written by the accomplished team of Mack David and Jerry Livingston, typified the show's breezy, jazzed atmosphere. The song became the centerpiece of an album of the show's music in Warren Barker-led orchestrations, which was released in 1959, a top-10 hit in the Billboard LP charts.

Stuart becomes enamored of a mysterious potential client (Kathleen Crowley), who refuses to divulge her name or why she wants to hire a private detective. Debut of Roger Smith as Jeff Spencer, Stuart's partner. Jeff is said to be in San Francisco at the beginning of the episode, and plays only a minor role here.