Rape Of The Mind by Joost Meerloo

Joost Abraham Maurits Meerloo (March 14, 1903 – November 17, 1976) was a Dutch/American Doctor of Medicine and psychoanalyst. He authored Rape of the Mind, an analysis of brainwashing techniques and thought control in totalitarian states.

Born as Abraham Maurits Meerloo in The Hague, Netherlands, Meerloo came to United States in 1946, was naturalized in 1950, and resumed Dutch citizenship in 1972. Dr. Meerloo practiced psychiatry for over forty years. He did staff work in the Netherlands until 1942 under Nazi occupation, when he assumed the name Joost (instead of the more Jewish-sounding Abraham) to fool the occupying forces. In 1942 he fled to Belgium,[1] and from there he escaped to England (after barely eluding death at the hands of the Germans). He became a colonel and was chief of the Psychological Department of the Dutch Army-in-Exile in England.

After the war, he served as High Commissioner for Welfare in the Netherlands, and was an adviser to UNRRA and SHAEF. An American citizen since 1950, Dr. Meerloo was a member of the faculty at Columbia University and Associate Professor of Psychiatry at the New York School of Psychiatry. He was the author of many books, including Rape of the Mind (a classic work on brainwashing), Conversation and Communication, and Hidden Communion.

He was the son of Bernard and Anna Frederika (Benjamins) Meerloo. He was the youngest of six children and the only one to escape his occupied country and survive the holocaust. 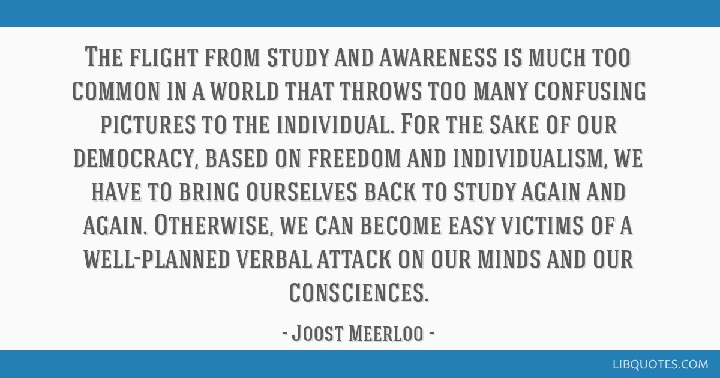 Meerloo specialized in the area of thought control techniques used by totalitarian and other regimes. Rape of the Mind

Meerloo's best-known[2] book is Rape of the Mind, published in 1956. The book received wide attention in part because it dealt with totalitarian applications of brainwashing techniques during the Korean War.

The book explains how scientific brainwashing is done and argues that "hardly anyone can resist such." "Fear, and continual pressure are known to create a menticidal hypnosis. The conscious part of the personality no longer takes part in the automatic confessions. The brainwashee lives in a trance, repeating the record grooved into him by somebody else."

Like their totalitarian counterparts, democratic societies are subject to the insidious influences of mind control. Such influences surround the citizens of free societies, "both on a political and a nonpolitical level and they become as dangerous to the free way of life as are the aggressive totalitarian governments themselves." People must guard against the creeping intrusion into their minds by technology, bureaucracy, prejudice, and mass delusion.

Freedom and democracy depend in part on education for mental freedom—helping children and adults to think for themselves and to see the essentials of a problem—helping them to understand concepts, not merely to memorize facts.

Throughout most of the book, Meerloo's targets are the historic roles of the Nazis and of the Communists in the post-1945 world. However, he also attacks the witch-hunting of individuals through the House Un-American Activities Committee: "the Congressional right to investigate can be abused and misused. The power to investigate may become the power to destroy -- not only the man under attack, but also the mental integrity of those who, in one way or another, are witnesses to the investigation. In a subtle way, the current wave of Congressional investigations may have a coercive effect on our citizenry."