In Praise of Folly 1876 edition 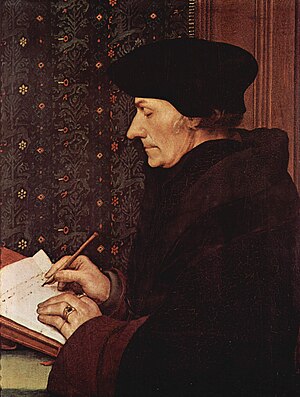 In Praise of Folly, also translated as The Praise of Folly (Latin: Stultitiae Laus or Moriae Encomium; Greek title: Μωρίας ἐγκώμιον (Morias egkomion); Dutch title: Lof der Zotheid), is an essay written in Latin in 1509 by Desiderius Erasmus of Rotterdam and first printed in June 1511. Inspired by previous works of the Italian humanist Faustino Perisauli [it] De Triumpho Stultitiae, it is a satirical attack on superstitions and other traditions of European society as well as on the Western Church.

Erasmus revised and extended his work, which was originally written in the space of a week while sojourning with Sir Thomas More at More's house in Bucklersbury in the City of London. The title Moriae Encomium had a punning second meaning as In Praise of More. In Praise of Folly is considered one of the most notable works of the Renaissance and played an important role in the beginnings of the Protestant Reformation. 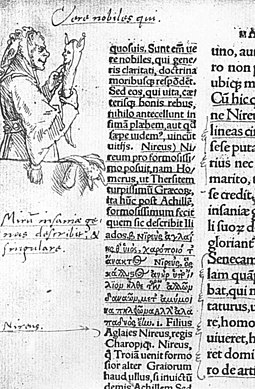 Hans Holbein's witty marginal drawing of Folly (1515), in the first edition, a copy owned by Erasmus himself (Kupferstichkabinett, Basel)

In Praise of Folly starts off with a satirical learned encomium, in which Folly praises herself, after the manner of the Greek satirist Lucian, whose work Erasmus and Sir Thomas More had recently translated into Latin, a piece of virtuoso foolery; it then takes a darker tone in a series of orations, as Folly praises self-deception and madness and moves to a satirical examination of pious but superstitious abuses of Catholic doctrine and corrupt practices in parts of the Roman Catholic Church—to which Erasmus was ever faithful—and the folly of pedants. Erasmus had recently returned disappointed from Rome, where he had turned down offers of advancement in the curia, and Folly increasingly takes on Erasmus' own chastising voice. The essay ends with a straightforward statement of Christian ideal: "No Man is wise at all Times, or is without his blind Side."

Erasmus was a good friend of More, with whom he shared a taste for dry humor and other intellectual pursuits. The title "Morias Encomium" can also be read as meaning "In praise of More". The double or triple meanings go on throughout the text.

The essay is filled with classical allusions delivered in a style typical of the learned humanists of the Renaissance. Folly parades as a goddess, offspring of Plutus, the god of wealth and a nymph, Freshness. She was nursed by two other nymphs, Inebriation and Ignorance. Her faithful companions include Philautia (self-love), Kolakia (flattery), Lethe (forgetfulness), Misoponia (laziness), Hedone (pleasure), Anoia (dementia), Tryphe (wantonness), and two gods, Komos (intemperance) and Nigretos Hypnos (heavy sleep). Folly praises herself endlessly, arguing that life would be dull and distasteful without her. Of earthly existence, Folly pompously states, "you'll find nothing frolic or fortunate that it owes not to me."