Man's Place in the Universe 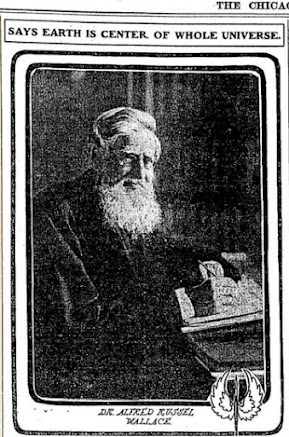 In 1903, Alfred Russel Wallace was one of authors to bring the theory of evolution into the debate about plurality. Unlike some who used evolution to support the possibility of life on other planets, Wallace argued that evolution of life on Earth occurred under such perfect circumstances that it is unlikely that the same circumstances would align again on another planet. He was one of the first to use evolution as an argument against plurality. His idea that there is a supreme purpose, we are unique, was based on Astronomy. This aspect of Wallace's argument is not a new theology, but a new idea in science. He was the codiscoverer of natural selection, though at the end of his life he became convinced that human intelligence and morality could only be made or created by a deity, or in other words, that only a higher power could have produced such a change in nature.

In his essay “Man’s Place in the Universe,” Wallace says that new evidence in the past twenty-five years suggests that the universe is not infinite and that Earth is relatively near the universe's center. If the universe were infinite, he says, we would receive much brighter light from the stars at night, and there wouldn’t be dark spots in between stars. This idea is otherwise known as Olber's Paradox. He writes, "...we should at least receive quite as much light from them as the sun gives us at noonday. But the amount we actually receive is so immensley less that this as to prove that the concentric spheres of stars beyond those visible to the naked eye cannot be very numerous" (pg 399). He argues somewhat convincingly (although we know better today) that our planet must be situated at or very near the center of the universe because the stars seem uniformly distributed in the night sky, and the shape of the Milky Way appears symmetrical from our vantage point here on earth.

For Wallace, the recent development of spectrum analysis, which proved that other stars and planets are made up of the same elements as Earth, demonstrated that Earth is unique in it's ability to support life in the solar system. He says, “All the evidence at our command goes to assure us that our earth alone in the Solar System has been from its very origin adapted to be the theatre for the development of intelligent life. Our position within that system is, therefore, as central and unique as that of our Sun in the whole stellar universe."

Wallace also had 5 factors he said were essential for life to occur and they were not present on other planets. These factors include:

The atmosphere of Earth is the correct density for the production and movement of vapors such as clouds and regulation of the Earth's temperature.

Oceans form the majority of the Earth's surface and are kept in constant circulation by the moon causes which causes tidal action.

The placement of earth is close enough and not too far away from the sun and is able to sustain a temperature that supports life for billions of years.

The oceans are deep enough to have a constant presence on the Earth and help maintain the surface temperature.

Dust exists in the atmosphere to allow for the production of rain and other precipations to form. This dust usually comes from deserts or volcanoes

All five of these conditions must be met in a way that they support life. If any one was changed in any little way, the Earth would not be able to support its inhabitants. Wallace believed that it was impossible for any other planet to be capable of having all five of these conditions exist in Earth's perticular way. "...we shall at once see how peculiar and unique is our place and condition within the Solar System" (pp 14).

Because of the uniqueness of Earth, Wallace argued for an intelligent being who designed the universe. Wallace says in his introduction that "... I am taking the view of those who believe in some Intelligent Cause at the back of this universe, some creator or creators, designer or designers." Despite his theological stance, Wallace still relied on scientific reasoning to make his points and to argue against plurality. The result is a unique mix of science and theology that blend together in a relatively convincing argument that subsequently didn't have a whole lot of influence at the time.