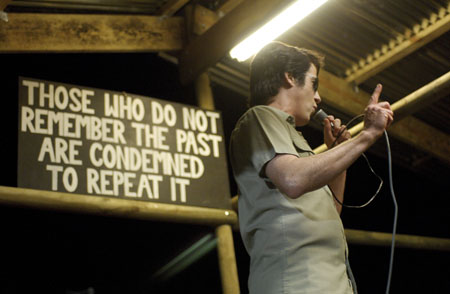 This feature-length docudrama tracks the final build-up to a horrific doomsday: the infamous mass murder and suicides of Jim Jones’ cult followers in the jungles of Guyana, where over 900 men, women and children died on November 18th, 1978.

Using extensive dramatic re-enactments, newly-released U.S. government information, as well as archival footage and interviews, Jonestown: Paradise Lost goes beyond ‘official reality’ to take the viewer deep into the inner workings of this monstrous cult and its apocalyptic end. One of the most infamous assassinations in American history happened on November 27, 1978 at City Hall in San Francisco. It was a notorious day of infamy that haunts the entire nation today.

For me it started with an innocuous reference of Senator Dianne Feinstein having a concealed carry permit back in those days. I mean the top gun banners of the United States were packing heat. Then I stumbled on the above history lesson to review. Having studied many murders and assassinations, the patterns were keenly understood. I watched the movie Milk and saw them dramatized.

We are led to believe that Dan White was angry after not being reinstated to the Board of Supervisors after resigning. He surreptitiously entered City Hall above and searched out Mayor Moscone and Harvey Milk and shot both of them. Diane Feinstein was near by and entered both offices and tended to both men plugging the bullet holes with her fingers a noble deed. However, they were both already dead. You see there were two distinct wound patterns and two different types of bullets used. The smell test starts.

We see the democratic party was controlled by Jim Jones. Kamala Harris was mentored by Willie Brown. Willie Brown was mentored by Jim Jones. They're rolling out the 'vaccine.' You are being pressured to take it. History repeats with an mRNA Kool Aid. You will be frightened, intimidated and pressured to take it. The test was good in Jonestown. RESIST! RESIST! RESIST! It's cult programming. Tomorrow the WORLD!