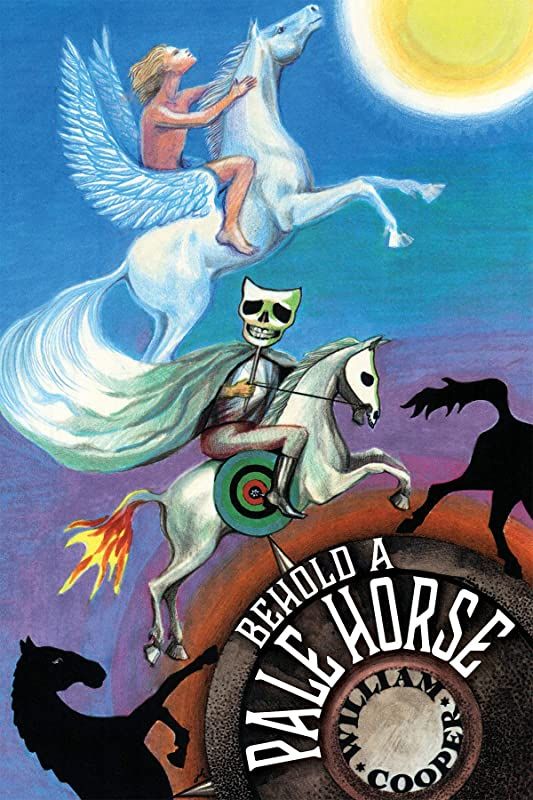 Cooper produced and published Behold a Pale Horse in 1991. The book has been influential among "UFO and militia circles". Just prior to the trial of Terry Nichols in 1997, The Guardian described it as "the manifesto of the militia movement".

According to sociologist Paul Gilroy, Cooper claimed "an elaborate conspiracy theory that encompasses the Kennedy assassination, the doings of the secret world government, the coming ice age, and a variety of other covert activities associated with the Illuminati's declaration of war upon the people of America". Political scientist Michael Barkun characterized it as "among the most complex superconspiracy theories", and also among the most influential due to its popularity in militia circles as well as mainstream bookstores. Historian Nicholas Goodrick-Clarke described the book as a "chaotic farrago of conspiracy myths interspersed with reprints of executive laws, official papers, reports and other extraneous materials designed to show the looming prospect of a world government imposed on the American people against their wishes and in flagrant contempt of the Constitution."

In Behold a Pale Horse Cooper proposed that AIDS was the result of a conspiracy to decrease the populations of blacks, Hispanics, and homosexuals. In 2000 South Africa's Minister of Health Manto Tshabalala-Msimang received criticism for distributing the chapter discussing this theory to senior South African government officials. Nicoli Nattrass, a longtime critic of AIDS denialists, criticized Tshabalala-Msimang for lending legitimacy to Cooper's theories and disseminating them in Africa.

UFOs, aliens and the Illuminati

Cooper gained attention in Ufology circles in 1988 when he claimed to have seen secret documents while in the Navy describing governmental dealings with extraterrestrials, a topic on which he expanded in Behold a Pale Horse. (By one account he served as a "low level clerk" in the Navy, and as such would not have had the security clearance needed to access classified documents.) UFOlogists later asserted that some of the material that Cooper claimed to have seen in Naval Intelligence documents was actually plagiarized verbatim from their research, including several items that the UFOlogists had fabricated as pranks. Don Ecker of UFO Magazine ran a series of exposés on Cooper in 1990.

Cooper linked the Illuminati with his beliefs that extraterrestrials were secretly involved with the United States government, but later retracted these claims. He accused Dwight D. Eisenhower of negotiating a treaty with extraterrestrials in 1954, then establishing an inner circle of Illuminati to manage relations with them and keep their presence a secret from the general public. Cooper believed that aliens "manipulated and/or ruled the human race through various secret societies, religions, magic, witchcraft, and the occult", and that even the Illuminati were unknowingly being manipulated by them.

Cooper described the Illuminati as a secret international organization, controlled by the Bilderberg Group, that conspired with the Knights of Columbus, Masons, Skull and Bones, and other organizations. Its ultimate goal, he said, was the establishment of a New World Order. According to Cooper the Illuminati conspirators not only invented alien threats for their own gain, but actively conspired with extraterrestrials to take over the world.[8] Cooper believed that James Forrestal's fatal fall from a window on the sixteenth floor of Bethesda Hospital was connected to the alleged secret committee Majestic 12, and that JASON advisory group scientists reported to an elite group of Trilateral Commission and Council on Foreign Relations executive committee members who were high-ranking members of the Illuminati.

Cooper also claimed that the antisemitic conspiracy theory forgery The Protocols of the Elders of Zion was actually an Illuminati work, and instructed readers to substitute "Sion" for "Zion", "Illuminati" for "Jews", and "cattle" for "Goyim".

In Behold a Pale Horse, Cooper asserted that President John F. Kennedy was assassinated because he was about to reveal that extraterrestrials were in the process of taking over the Earth. According to a "top secret" video of the assassination that Cooper claimed to have discovered, the driver of the presidential limousine, William Greer, used "a gas pressure device developed by aliens from the Trilateral Commission" to shoot the president from the driver's seat. The Zapruder film shows Greer twice turning to look into the back seat of the car; Cooper theorized that Greer first turned to assess Kennedy's status after the external attack, and then to fire the fatal shot. Conspiracy theories implicating Greer reportedly "snowballed" after publication of Behold a Pale Horse. Cooper's video purporting to prove his theory was analyzed by several television stations, according to one source, and was found to be "... a poor-quality fake using chunks of the... Zapruder film."

(I thought it was a .45 ACP. They found a slug casing on the street. He doesn't have to right about everything to be right about most things. I guess that's why they killed him.) 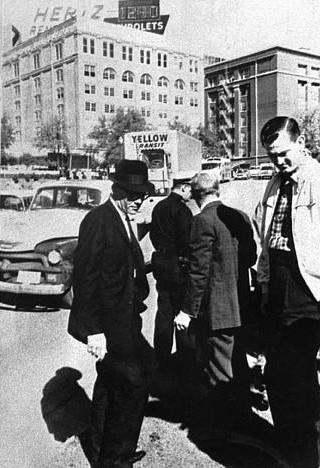 Deputy Sheriff Ed "Buddy" Walthers also found evidence of a bullet different from those which came from the Mannlicher-Carcano rifle attributed to Oswald. He discovered a bullet he identif ied as a .45 caliber slug across from where Kennedy was shot. Before he could piek it up, an unknown man approached him and the city pólice near him, saying "get the fuck out of here." That was the last heard of the bullet which was the wrong caliber for the Italian rifle. According to the Dallas Iconoclast, the bullet was found across from a manhole where one witness had reported seeing smoke following the shooting on November 22, 1963. Walthers, like so many witnesses whose evidence contradicts official findings, died under somewhat mysterious circumstances in I969. Sent to apprehend an escaped convict, he was somehow shot in the back after opening a door to the convict's motel room in a Serpico- like shootout.

As Cooper moved away from the Ufology community and toward the militia and anti-government subculture in the late 1990s, he became convinced that he was being personally targeted by President Bill Clinton and the Internal Revenue Service. In July 1998, he was charged with tax evasion; an arrest warrant was issued, but Cooper eluded repeated attempts to serve it. In 2000, he was named a "major fugitive" by the United States Marshals Service.

On November 5, 2001, Apache County sheriff's deputies attempted to arrest Cooper at his Eagar, Arizona home on charges of aggravated assault with a deadly weapon and endangerment stemming from disputes with local residents. After an exchange of gunfire during which Cooper shot one of the deputies in the head, Cooper was fatally shot. Federal authorities reported that Cooper had spent years evading execution of the 1998 arrest warrant, and according to a spokesman for the Marshals Service, he vowed that "he would not be taken alive".