Carroll Quigley (November 9, 1910 - January 3, 1977) was an American historian and theorist of the evolution of civilizations. He is remembered for his teaching work as a professor at Georgetown University, and for his speculations about global conspiracies concerning their attempts to spread certain values globally.

In his freshman year (1965) in the School of Foreign Service at Georgetown, future U.S. President Bill Clinton took Quigley's course, receiving a 'B' as his final grade in both semesters (an excellent grade in a course where nearly half the students received D or lower).

In 1991, Clinton named Quigley as an important influence on his aspirations and political philosophy, when Clinton launched his presidential campaign in a speech at Georgetown. He mentioned Quigley again during his acceptance speech to the 1992 Democratic National Convention, as follows:

As a teenager, I heard John Kennedy's summons to citizenship. And then, as a student at Georgetown, I heard that call clarified by a professor named Carroll Quigley, who said to us that America was the greatest Nation in history because our people had always believed in two things–that tomorrow can be better than today and that every one of us has a personal moral responsibility to make it so.

Quigley and the Round Table group

One distinctive feature of Quigley's historical writings is his assertion that the Round Table movement have played a significant role in recent world history. His writing on this topic has made Quigley famous among many who investigate conspiracy theories.

The Evolution of Civilizations: An Introduction to Historical Analysis

The Evolution of Civilizations is a comprehensive and perceptive look at the factors behind the rise and fall of civilizations. Quigley examines the application of scientific method to the social sciences, then establishes his historical hypotheses. He poses a division of culture into six levels from the abstract to the more concrete. He then tests those hypotheses by a detailed analysis of five major civilizations: the Mesopotamian, the Canaanite, the Minoan, the classical, and the Western.

Quigley defines a civilization as “a producing society with an instrument of expansion.” A civilization’s decline is not inevitable but occurs when its instrument of expansion is transformed into an institution—that is, when social arrangements that meet real social needs are transformed into social institutions serving their own purposes regardless of real social needs. 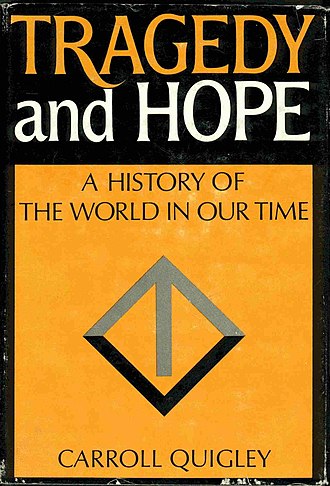 Tragedy and Hope: A History of the World in Our Time is a work of history written by former Georgetown University professor, mentor of Bill Clinton, and historian, Carroll Quigley. The book covers the period of roughly 1880 to 1963 and is multidisciplinary in nature though perhaps focusing on the economic problems brought about by the First World War and the impact these had on subsequent events. While global in scope, the book focuses on Western civilization. It is written from a Eurocentric perspective.

The book has attracted the attention of those interested in geopolitics due to Quigley's assertion that a secret society initially led by Cecil Rhodes, Alfred Milner and others had considerable influence over British and American foreign policy in the first half of the twentieth century. From 1909 to 1913, Milner organized the outer ring of this society as the semi-secret Round Table groups.

The book is written based on archived files from the Council on Foreign Relations.

Quigley exposes the secret society's established in London in 1891, by Cecil Rhodes. Quigley explains how these men worked in union to begin their society to control the world. He explains how all the wars from that time were deliberately created to control the economies of all the nations.

Quigley's observations on the uses of war are penetrating. Throughout history, society's decisions regarding its weapons systems have been decisive in shaping human social, economic, and political decisions. Of special interest today is Quigley's division of western weapons systems over the last thousand years into five successive stages, each associated with different political system. In Quigley's social analysis the dominance of democracy in the 20th century is attributable to the acceptance in the 19th century of a weapons system that favored democracy, the hand gun and rifle. In the consequent tilt toward an atomistic society, loyalties to the once strong social structures of family, church, and workplace break down.

“The argument that the two parties should represent opposed ideals and policies... is a foolish idea. Instead, the two parties should be almost identical, so that the American people can throw the rascals out at any election without leading to any profound or extensive shifts in policy. Then it should be possible to replace it, every four years if necessary, by the other party which will be none of these things but will still pursue, with new vigor, approximately the same basic policies.”