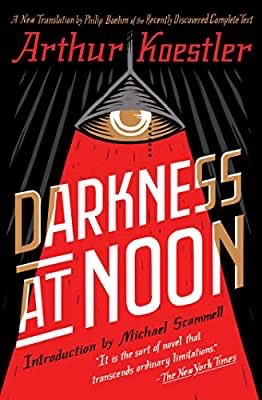 Darkness at Noon (German: Sonnenfinsternis) is a novel by Hungarian-born British novelist Arthur Koestler, first published in 1940. His best known work, it is the tale of Rubashov, an Old Bolshevik who is arrested, imprisoned, and tried for treason against the government that he helped to create.

The novel is set in 1939 during the Stalinist Great Purge and Moscow show trials. Despite being based on real events, the novel does not name either Russia or the Soviets, and tends to use generic terms to describe people and organizations: for example the Soviet government is referred to as "the Party" and Nazi Germany is referred to as "the Dictatorship". Joseph Stalin is represented by "Number One", a menacing dictator. The novel expresses the author's disillusionment with the Bolshevik ideology of the Soviet Union at the outset of World War II.

In 1998, the Modern Library ranked Darkness at Noon number eight on its list of the 100 best English-language novels of the 20th century, even though Koestler wrote it in German.

Koestler wrote Darkness at Noon as the second part of a trilogy: the first volume was The Gladiators (1939), first published in Hungarian. It was a novel about the subversion of the Spartacus revolt. The third novel was Arrival and Departure (1943), about a refugee during World War II. Koestler, who was by then living in London, rewrote that novel in English after the original German version had been lost. 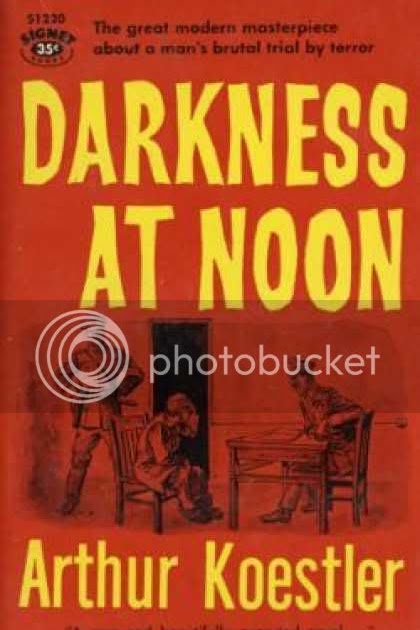 Darkness at Noon was commenced in German while Koestler was living in Paris and, as he describes in the first chapter of Scum of the Earth (book), completed in the summer of 1939 just outside the village of Belvédère in the Alpes-Maritimes where he was staying with his companion, the sculptor Daphne Hardy, who translated it into English during while she was living with him. For decades the German text was thought to have been lost during the escape of Koestler and Hardy from Paris in May 1940, just before the German occupation of France. However, a copy had been sent to Swiss publisher Emil Oprecht. Rupert Hart-Davis, Koestler's editor at Jonathan Cape in London had misgivings about the English text but agreed to publish it when a request to Oprecht for his copy went unanswered. At Hart-Davis' prompting, and unable to reach Koestler, Hardy changed the title from The Vicious Circle to Darkness at Noon. The new title is a reference to Job 5:14: "They meet with darkness in the daytime, and grope in the noonday as in the night”- a description of the moral dilemmas faced by the book's protagonist, as well as Koestler's own escape from the Nazis. In August 2015, Oprecht's copy was identified in a Zurich library by a doctoral candidate of the University of Kassel. The original German manuscript was published as Sonnenfinsternis (Solar Eclipse) in May 2018 by Elsinor Verlag. A new professional English translation based on the newfound text was published in 2019.

In his introduction to the 2019 translation, Koestler biographer Michael Scammell writes that a fresh translation was desirable because Hardy's, though ″serving the novel well for over seven decades,″ had difficulties. ″She had been forced by circumstances to work in haste, with no dictionaries or other resources available for consultation, which exposed her understandable lack of familiarity with the Soviet and Nazi machinery of totalitarianism. ... The text she worked on was not quite final either. ... It seemed that a fresh and up-to-date translation of the novel would be helpful, preferably by a seasoned translator with the knowledge and experience to clarify the jargon of Marxism-Leninism and present it in terminology that is both accurate and makes sense to an English-speaking reader.″ Philip Boehm, Scammell writes, ″proved the ideal choice for the job.″

Koestler, then, describes the unfolding of what he calls 'Kafkaesque events' in his life; spending four months in the concentration camp in the Pyrenees and being released in January 1940, only to be continuously harassed by the police. “During the next three months I finished the novel in the hours snatched between interrogations and searches of my flat, in the constant fear that I would be arrested again and the manuscript of Darkness at Noon confiscated”.

After Hardy mailed her translation to London in May 1940, she fled to London. Meanwhile, Koestler joined the French Foreign Legion, deserted it in North Africa, and made his way to Portugal. Waiting in Lisbon for passage to Great Britain, Koestler heard a false report that the ship taking Hardy to England had been torpedoed and all persons lost (along with his only manuscript); he attempted suicide. (He wrote about this incident in Scum of the Earth (1941), his memoir of that period.) Koestler finally arrived in London, and the book was published there in early 1941.