The Ministry Of Fear 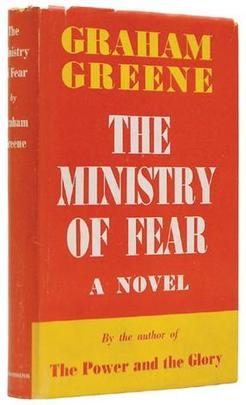 The Ministry of Fear is a 1943 novel written by Graham Greene. It was first published in Britain by William Heinemann. It was made into the 1944 film Ministry of Fear, directed by Fritz Lang and starring Ray Milland.

The title is explained in the book. The Nazi regime, in countries it controlled and in those it intended to subvert, built up information on individuals in order to blackmail them into co-operation. This Greene called their ministry of fear.

In London during the Blitz. Arthur Rowe attends a charity fête. Convicted of murder for the mercy killing of his wife, he has just been released from a psychiatric prison. A fortune-teller tells him the answer to the "guess the weight of the cake" competition, enabling Rowe to win it. As he leaves, the organisers try to take the cake back, saying there's been a mistake, but Rowe refuses.

The next day, a man offers Rowe money for the cake and then tries to poison him, but an air raid bomb demolishes the house, knocking them both out. Worried for himself and wary of the police, Rowe hires a private detective to watch him and goes to the charity that ran the fête. There he meets Willi and Anna Hilfe, Austrian refugees who are brother and sister. Willi goes with Rowe to the fortune-teller's home. There they join in a séance, during which a man is murdered with Rowe's knife. Rowe escapes before the police arrive.

Rowe contemplates suicide, but meets a man who asks him to take some books to a hotel. At the hotel he finds Anna and a bomb in the case explodes. When Rowe regains consciousness, he has amnesia. The nurses tell him his name is Richard Digby, but Anna visits and calls him "Arthur". Rowe starts to fall in love with Anna.

Becoming convinced that the sanatorium is run by Nazi agents, Rowe escapes and goes to the police. The police tell him that the man who Rowe thought murdered isn't dead, and the cake had a microfilm of secret plans hidden in it. They take him to a tailor's shop where he identifies the man he thought dead. Before they can question the man, he kills himself.

After the police round up most of the spy ring, Rowe rings the telephone number that the tailor called before killing himself, and hears Anna's voice. He finds out the address and, going there, learns that Willi is a member of the spy ring.

Willi escapes, intending to reach neutral Ireland with the microfilm sewn into his new suit, but when cornered by Rowe commits suicide. Rowe returns to Anna.