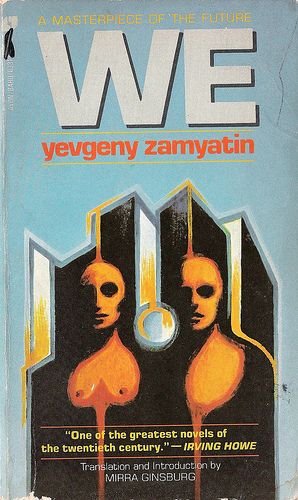 We (Russian: Мы, romanized: My) is a dystopian novel by Russian writer Yevgeny Zamyatin, written 1920?1921. The novel was first published as an English translation by Gregory Zilboorg in 1924 by E. P. Dutton in New York. The novel describes a world of harmony and conformity within a united totalitarian state. It is believed that the novel had a huge influence on the works of Orwell and Huxley, as well as on the emergence of the genre of dystopia.[3] George Orwell claimed that Aldous Huxley's 1931 Brave New World must be partly derived from We, but Huxley denied it.

We is set in the future. D-503, a spacecraft engineer, lives in the One State, an urban nation constructed almost entirely of glass, which assists mass surveillance. The structure of the state is Panopticon-like, and life is scientifically managed F. W. Taylor-style. People march in step with each other and are uniformed. There is no way of referring to people except by their given numbers. The society is run strictly by logic or reason as the primary justification for the laws or the construct of the society. The individual's behaviour is based on logic by way of formulas and equations outlined by the One State. 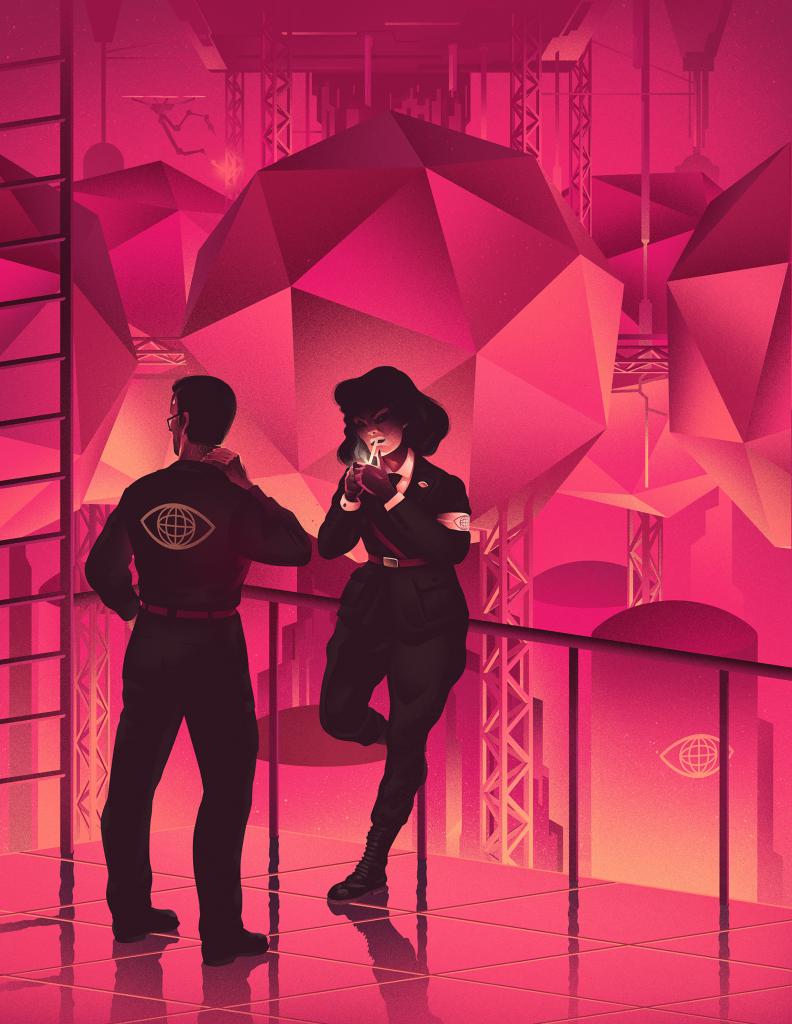 A few hundred years after the One State's conquest of the entire world, the spaceship Integral is being built in order to invade and conquer extraterrestrial planets. Meanwhile, the project's chief engineer, D-503, begins a journal that he intends to be carried upon the completed spaceship.

Like all other citizens of One State, D-503 lives in a glass apartment building and is carefully watched by the secret police, or Bureau of Guardians. D-503's lover, O-90, has been assigned by One State to visit him on certain nights. She is considered too short to bear children and is deeply grieved by her state in life. O-90's other lover and D-503's best friend is R-13, a State poet who reads his verse at public executions.

While on an assigned walk with O-90, D-503 meets a woman named I-330. I-330 smokes cigarettes, drinks alcohol, and shamelessly flirts with D-503 instead of applying for an impersonal sex visit; all of these are highly illegal according to the laws of One State.

Both repelled and fascinated, D-503 struggles to overcome his attraction to I-330. She invites him to visit the Ancient House, notable for being the only opaque building in One State, except for windows. Objects of aesthetic and historical importance dug up from around the city are stored there. There, I-330 offers him the services of a corrupt doctor to explain his absence from work. Leaving in horror, D-503 vows to denounce her to the Bureau of Guardians, but finds that he cannot.

He begins to have dreams, which disturbs him, as dreams are thought to be a symptom of mental illness. Slowly, I-330 reveals to D-503 that she is involved with the Mephi, an organization plotting to bring down the One State. She takes him through secret tunnels inside the Ancient House to the world outside the Green Wall, which surrounds the city-state. There, D-503 meets the inhabitants of the outside world: humans whose bodies are covered with animal fur. The aims of the Mephi are to destroy the Green Wall and reunite the citizens of One State with the outside world.

Despite the recent rift between them, O-90 pleads with D-503 to impregnate her illegally. After O-90 insists that she will obey the law by turning over their child to be raised by the One State, D-503 obliges. However, as her pregnancy progresses, O-90 realizes that she cannot bear to be parted from her baby under any circumstances. At D-503's request, I-330 arranges for O-90 to be smuggled outside the Green Wall.

In his last journal entry, D-503 indifferently relates that he has been forcibly tied to a table and subjected to the "Great Operation", which has recently been mandated for all citizens of One State in order to prevent possible riots; having been psycho-surgically refashioned into a state of mechanical "reliability", they would now function as "tractors in human form". This operation removes the imagination and emotions by targeting parts of the brain with X-rays. After this operation, D-503 willingly informed the Benefactor about the inner workings of the Mephi. However, D-503 expresses surprise that even torture could not induce I-330 to denounce her comrades. Despite her refusal, I-330 and those arrested with her have been sentenced to death, "under the Benefactor's Machine".

Meanwhile, the Mephi uprising gathers strength; parts of the Green Wall have been destroyed, birds are repopulating the city, and people start committing acts of social rebellion. Although D-503 expresses hope that the Benefactor shall restore "reason", the novel ends with One State's survival in doubt. I-330's mantra is that, just as there is no highest number, there can be no final revolution.