The Exodus. The very word invokes an epic tale of Pharaohs and Israelites, plagues and miracles, the splitting of the sea, the drowning of an army, Moses and revelation. The story is at the very heart of Judaism, Christianity and Islam.

After six years of research, working with archeologists, Egyptologists, geologists and theologians, Simcha Jacobovici came to the groundbreaking conclusion that the Exodus took place hundreds of years earlier than previously thought. With this new timetable in hand, Jacobovici and his colleagues re-examined long ignored archeological artifacts and uncovered the truth about the Exodus and the Egyptian dynasty that ruled at the time.

The producers teamed up with some of the world’s most accomplished special effects designers to create a unique digital, organic experience of the Exodus. Blending archeological findings with modern eye catching effects, Jacobovici built a virtual museum to showcase his discoveries.

However, they lead you to the wrong Mount Sinai. 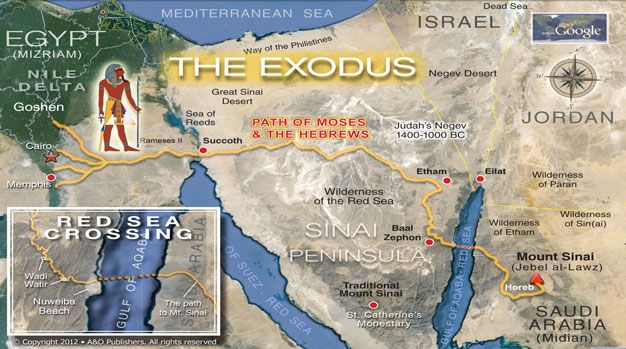 Jabal al-Lawz (Arabic: جَبَل ٱللَّوْز‎;), also known as Gebel el-Lawz, is a mountain located in northwest Saudi Arabia, near the Jordanian border, above the Gulf of Aqaba at 2,580 metres (8,460 feet) above sea level. The name means 'mountain of almonds'. The peak of Jabal al-Lawz, consists of a light-colored, calc-alkaline granite that is intruded by rhyolite and andesite dikes which generally trend eastward.