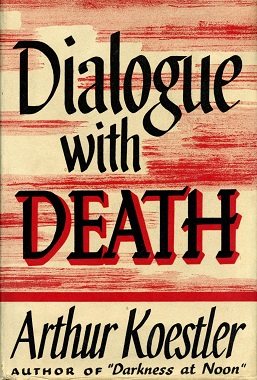 Dialogue with Death, a book by Arthur Koestler, was originally published in 1937 as a section (Part II) of his book Spanish Testament, in which he describes his experiences during the Spanish Civil War. Part II of the book was subsequently decoupled from Spanish Testament and, with minor modifications, published on its own under the title Dialogue with Death (see quotation below). The book describes Koestler’s prison experiences under sentence of death. The book was written in the late autumn of 1937 immediately after his release from prison, when the events were still vivid in his memory.

In the second volume of his autobiography The Invisible Writing, written by Koestler fifteen years later, the following footnote appears:

In all foreign editions, including the American, Dialogue with Death appeared as a self-contained book. In the original English edition, however (Gollancz and Left Book Club, 1937), it formed the second part of Spanish Testament the first part of which consisted of the earlier propaganda book on Spain that I had written for Muenzenberg. Spanish Testament is (and shall remain) out of print; Dialogue with Death has been reissued in England under that title, in the form in which it was originally written.