The last age of the Church 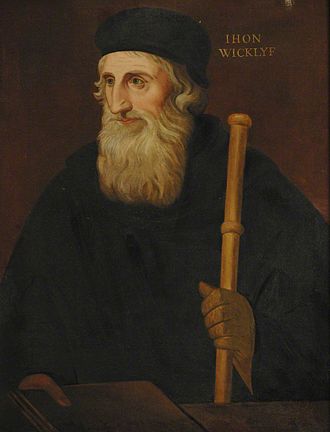 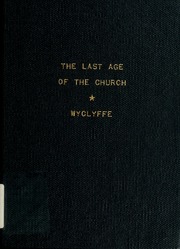 John Wycliffe (/ˈwɪklɪf/; also spelled Wyclif, Wycliff, Wiclef, Wicliffe, Wickliffe; c. 1320s – 31 December 1384) was an English scholastic philosopher, theologian, biblical translator, reformer, priest, and a seminary professor at the University of Oxford. He became an influential dissident within the Roman Catholic priesthood during the 14th century and is considered an important predecessor to Protestantism.

Wycliffe attacked the privileged status of the clergy which had bolstered their powerful role in England and the luxury and pomp of local parishes and their ceremonies. Wycliffe advocated translation of the Bible into the common vernacular. In 1382 he completed a translation directly from the Vulgate into Middle English – a version now known as Wycliffe's Bible. It is probable that he personally translated the Gospels of Matthew, Mark, Luke, and John; and it is possible he translated the entire New Testament, while his associates translated the Old Testament. Wycliffe's Bible appears to have been completed by 1384, additional updated versions being done by Wycliffe's assistant John Purvey and others in 1388 and 1395.

Wycliffe's followers, known as Lollards, followed his lead in advocating predestination, iconoclasm, and the notion of caesaropapism, while attacking the veneration of saints, the sacraments, requiem masses, transubstantiation, monasticism, and the existence of the Papacy.

From the 16th century, the Lollard movement is sometimes regarded as the precursor to the Protestant Reformation. Wycliffe was accordingly characterised as the evening star of scholasticism and as the morning star of the English Reformation. Wycliffe's writings in Latin greatly influenced the philosophy and teaching of the Czech reformer Jan Hus (c. 1369–1415), whose execution in 1415 sparked a revolt and led to the Hussite Wars of 1419–1434.

Battle For The Bible

John Wycliffe translated a most important thing that was left out of other bibles.

This segment reveals the hidden secret that the church has attempted to conceal from us. The resurrection is a transformation to a new being. Is it spiritual or robotic? The Hebrew version says they are to slay Adam's seed. That's the tree of life God made.

6 Because of such things as these the charon af Hashem habah (the coming burning wrath of Hashem) is on the way.

9 Do not speak sheker to one another, having disrobed from the Adam hakadmoni (old [unregenerated] humanity) with his ma’asim (works),

Again we are putting to death. We are dispensing with male and female.

Olam HaZeh. in Judaism, the present physical world, as opposed to the world to come (Olam haBa). Adam HaChadash refers to a mystical or magical transformation to a new form of man.

These older texts carry great weight. We depend on the translater and the teacher.