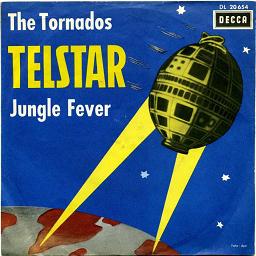 "Telstar" is a 1962 instrumental written and produced by Joe Meek for the English band the Tornados. The track reached number 1 on the U.S. Billboard Hot 100 in December 1962 (the second British recording to reach number 1 on that chart in the year, after "Stranger on the Shore" in May), and was also a number one hit in the UK Singles Chart. It was the second instrumental single to hit number 1 in 1962 on both the US and UK weekly charts.

The record was named after the Telstar communications satellite, which was launched into orbit on 10 July 1962. Written and produced by Joe Meek, it featured either a clavioline or the similar Jennings Univox, both keyboard instruments with distinctive electronic sounds. It was recorded in Meek's studio in a small flat above a shop in Holloway Road, North London. "Telstar" won an Ivor Novello Award and is estimated to have sold at least five million copies worldwide.

"This was one of the first sci-fi-influenced pop songs," observed Tim Wheeler of Ash. "For its time it was so futuristic and it still sounds pretty weird today. It features Matt Bellamy's dad George on guitar… You can hear traces of it in Muse. 'Knights of Cydonia' was definitely him tipping his hat to his dad."

Robert George "Joe" Meek (5 April 1929 – 3 February 1967) was an English record producer, musician, sound engineer and songwriter who pioneered space age and experimental pop music. He also assisted the development of recording practices like overdubbing, sampling and reverb. Meek is considered one of the most influential sound engineers of all time, being one of the first to develop ideas such as the recording studio as an instrument, and becoming one of the first producers to be recognized for his individual identity as an artist.

Meek became fascinated with the idea of communicating with the dead. He would set up tape machines in graveyards in an attempt to record voices from beyond the grave, in one instance capturing the meows of a cat he believed was speaking in human tones, asking for help. In particular, he had an obsession with Buddy Holly (saying the late American rocker had communicated with him in dreams). By the end of his career, Meek's fascination with these topics had taken over his life following the deterioration in his mental health, and he started to believe that his flat contained poltergeists, that aliens were substituting his speech by controlling his mind, and that photographs in his studio were trying to communicate with him.

Meek was affected by bipolar disorder and schizophrenia, and, upon receiving an apparently innocent phone call from American record producer Phil Spector, Meek immediately accused Spector of stealing his ideas before hanging up angrily. His professional efforts were often hindered by his paranoia (Meek was convinced that Decca Records would put hidden microphones behind his wallpaper to steal his ideas), depression, and extreme mood swings. In later years, Meek started experiencing psychotic delusions, culminating in him refusing to use the studio telephone for important communications due to his beliefs that his landlady was eavesdropping on his calls through the chimney, that he could control the minds of others with his recording equipment, and that he could monitor his acts while away from the studio through supernatural means.

Meek was also a frequent recreational drug user, with his barbiturate abuse further worsening his depressive episodes. In addition, his heavy consumption of amphetamines caused him to fly into volatile rages with little or no provocation, at one point leading him to hold a gun to the head of drummer Mitch Mitchell to 'inspire' a high-quality performance.

On 3 February 1967, Meek killed his landlady Violet Shenton and then himself with a single-barrelled shotgun that he had confiscated from his protégé, former Tornados bassist and solo star Heinz Burt, at his Holloway Road home/studio. Meek had flown into a rage and taken the gun from Burt when he informed Meek that he had used it while on tour to shoot birds. Meek had kept the gun under his bed, along with some cartridges. As the shotgun had been owned by Burt, he was questioned intensively by police before being eliminated from their enquiries.