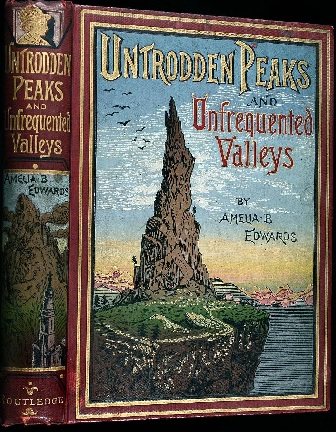 A MIDSUMMER RAMBLE IN THE DOLOMITES

Amelia Ann Blandford Edwards (1831-1892) was an English novelist, a journalist, a lady traveller and an Egyptologist. She published her first poem at the age of 7 and her first story at the age of 12. Amelia thereafter proceeded to publish a variety of poetry, stories and articles in a large number of magazines that included Chamber’s Journal, Household Words and All the Year Round. She also wrote for the newspapers, the Saturday Review and the Morning Post. Her first full-length novel was My Brother’s Wife (1855). Her early novels were well received, but it was Barbara’s History (1864), a novel of bigamy, that solidly established her reputation as a novelist. Her last novel, Lord Brackenbury (1880), emerged as a run-away success which went to 15 editions. She wrote a book in 1876 under the title of A Thousand Miles up the Nile. Enhanced with her own hand-drawn illustrations, the travelogue became an immediate bestseller.