Weather As A Force Multiplier: Owning The Weather In 2025 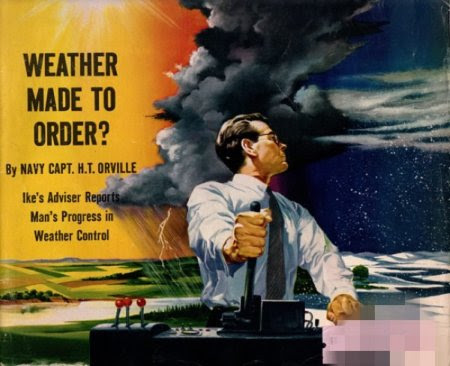 On November 13, 1946 pilot Curtis Talbot, working for the General Electric Research Laboratory, climbed to an altitude of 14,000 feet about 30 miles east of Schenectady, New York. Talbot, along with scientist Dr. Vincent J. Schaefer, released three pounds of dry ice (frozen carbon dioxide) into the clouds. As they turned south, Dr. Schaefer noted, “I looked toward the rear and was thrilled to see long streamers of snow falling from the base of the cloud through which we had just passed. I shouted to Curt to swing around, and as we did so we passed through a mass of glistening snow crystals! Needless to say, we were quite excited.” They had created the world’s first human-made snowstorm.

After the experiments of G.E.’s Research Laboratory, there was a feeling that humanity might finally be able to control one of the greatest variables of life on earth. And, as Cold War tensions heightened, weather control was seen by the United States as a potential weapon that could be even more devastating than nuclear warfare.

In August of 1953 the United States formed the President’s Advisory Committee on Weather Control. Its stated purpose was to determine the effectiveness of weather modification procedures and the extent to which the government should engage in such activities. Methods that were envisioned by both American and Soviet scientists—and openly discussed in the media during the mid-1950s— included using colored pigments on the polar ice caps to melt them and unleash devastating floods, releasing large quantities of dust into the stratosphere creating precipitation on demand, and even building a dam fitted with thousands of nuclear powered pumps across the Bering Straits. This dam, envisioned by a Russian engineer named Arkady Borisovich Markin would redirect the waters of the Pacific Ocean, which would theoretically raise temperatures in cities like New York and London. Markin’s stated purpose was to “relieve the severe cold of the northern hemisphere” but American scientists worried about such weather control as a means to cause flooding.