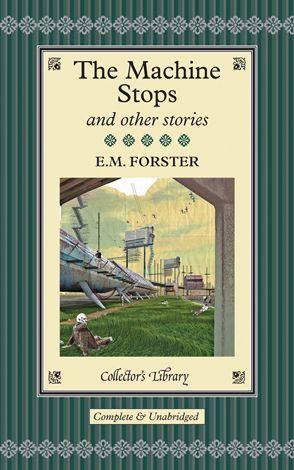 "The Machine Stops" is a science fiction short story (12,300 words) by E. M. Forster. After initial publication in The Oxford and Cambridge Review (November 1909), the story was republished in Forster's The Eternal Moment and Other Stories in 1928. After being voted one of the best novellas up to 1965, it was included that same year in the populist anthology Modern Short Stories. In 1973 it was also included in The Science Fiction Hall of Fame, Volume Two.

The story, set in a world where humanity lives underground and relies on a giant machine to provide its needs, predicted technologies such as instant messaging and the Internet.

The story describes a world in which most of the human population has lost the ability to live on the surface of the Earth. Each individual now lives in isolation below ground in a standard room, with all bodily and spiritual needs met by the omnipotent, global Machine. Travel is permitted, but is unpopular and rarely necessary. Communication is made via a kind of instant messaging/video conferencing machine with which people conduct their only activity: the sharing of ideas and what passes for knowledge.

The two main characters, Vashti and her son Kuno, live on opposite sides of the world. Vashti is content with her life, which, like most inhabitants of the world, she spends producing and endlessly discussing secondhand 'ideas'. Kuno, however, is a sensualist and a rebel. He persuades a reluctant Vashti to endure the journey (and the resultant unwelcome personal interaction) to his room. There, he tells her of his disenchantment with the sanitised, mechanical world.

He confides to her that he has visited the surface of the Earth without permission, and that he saw other humans living outside the world of the Machine. However, the Machine recaptures him, and he is threatened with 'Homelessness': expulsion from the underground environment and presumed death. Vashti, however, dismisses her son's concerns as dangerous madness and returns to her part of the world.

As time passes, and Vashti continues the routine of her daily life, there are two important developments. First, the life support apparatus required to visit the outer world is abolished. Most welcome this development, as they are skeptical and fearful of first-hand experience and of those who desire it. Secondly, "Technopoly", a kind of religion, is re-established, in which the Machine is the object of worship. People forget that humans created the Machine, and treat it as a mystical entity whose needs supersede their own.

Those who do not accept the deity of the Machine are viewed as 'unmechanical' and threatened with Homelessness. The Mending Apparatus—the system charged with repairing defects that appear in the Machine proper—has also failed by this time, but concerns about this are dismissed in the context of the supposed omnipotence of the Machine itself.

During this time, Kuno is transferred to a room near Vashti's. He comes to believe that the Machine is breaking down, and tells her cryptically "The Machine stops." Vashti continues with her life, but eventually defects begin to appear in the Machine. At first, humans accept the deteriorations as the whim of the Machine, to which they are now wholly subservient, but the situation continues to deteriorate, as the knowledge of how to repair the Machine has been lost.

Finally, the Machine collapses, bringing 'civilization' down with it. Kuno comes to Vashti's ruined room. Before they perish, they realise that humanity and its connection to the natural world are what truly matter, and that it will fall to the surface-dwellers who still exist to rebuild the human race and to prevent the mistake of the Machine from being repeated.