The Wonderful Wizard of Oz

The Wonderful Wizard of Oz is an American children's novel written by author L. Frank Baum and illustrated by W.W. Denslow, originally published by the George M. Hill Company in Chicago on May 17, 1900. It has since seen several reprints, most often under the title The Wizard of Oz, which is the title of the popular 1902 Broadway musical adaptation as well as the iconic 1939 live-action film.

The story chronicles the adventures of a young farm girl named Dorothy in the magical Land of Oz, after she and her pet dog Toto are swept away from their Kansas home by a cyclone. The book is one of the best-known stories in American literature and has been widely translated. The Library of Congress has declared it "America's greatest and best-loved homegrown fairytale." Its groundbreaking success and the success of the Broadway musical adapted from the novel led Baum to write thirteen additional Oz books that serve as official sequels to the first story. 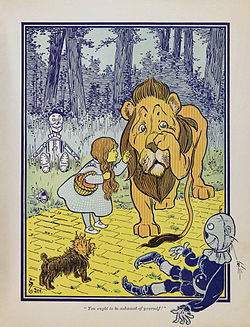 Baum dedicated the book "to my good friend & comrade, My Wife," Maud Gage Baum. In January 1901, George M. Hill Company completed printing the first edition, a total of 10,000 copies, which quickly sold out. It sold three million copies by the time it entered the public domain in 1956. 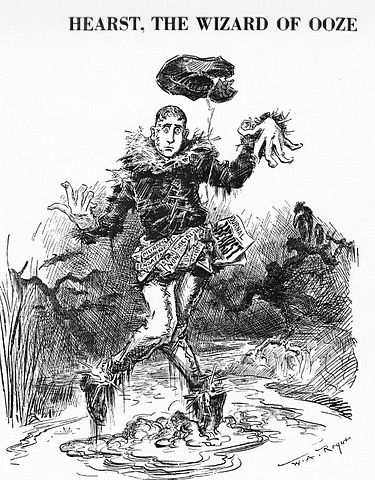 Cartoonist W. A. Rogers in 1906 sees the political uses of Oz: he depicts William Randolph Hearst as Scarecrow stuck in his own Ooze in Harper's Weekly

Political interpretations of The Wonderful Wizard of Oz include treatments of the modern fairy tale (written by L. Frank Baum and first published in 1900) as an allegory or metaphor for the political, economic, and social events of America in the 1890s. Scholars have examined four quite different versions of Oz: the novel of 1900, the Broadway play of 1901, the Hollywood film of 1939, and the numerous follow-up Oz novels written after 1900 by Baum and others.

The political interpretations focus on the first three, and emphasize the close relationship between the visual images and the story line to the political interests of the day. Biographers report that Baum had been a political activist in the 1890s with a special interest in the money question of gold and silver, and the illustrator William Wallace Denslow was a full-time editorial cartoonist for a major daily newspaper. For the 1901 Broadway production Baum inserted explicit references to prominent political characters such as President Theodore Roosevelt.

The Tin Man representing the industrial workers, especially those of American steel industries

The Cowardly Lion as a metaphor for William Jennings Bryan

Taylor also claimed a sort of iconography for the cyclone: it was used in the 1890s as a metaphor for a political revolution that would transform the drab country into a land of color and unlimited prosperity. It was also used by editorial cartoonists of the 1890s to represent political upheaval.

Other putative allegorical devices of the book include the Wicked Witch of the West as a figure for the actual American West; if this is true, then the Winged Monkeys could represent another western danger: Indigenous peoples of the Americas. The King of the Winged Monkeys tells Dorothy, "Once we were a free people, living happily in the great forest, flying from tree to tree, eating nuts and fruit and doing just as we pleased without calling anybody master. ... This was many years ago, long before Oz came out of the clouds to rule over this land."

I submit there is a deeper plot surrounding the hidden hand leading us by the creation of artificial realities they control. We term the news spinn doctors for this reason. The truth setting us free would most likely be learning about places like The Tavistock Institute that manufacture our opinions and realities. The jives with Christ's other lessons of love and forgiveness because reacting to artificial realities keeps us imprisoned.

For some strange reason people are induced to relish their servitude. This was the point of The Wonderful Wizard of Oz novel to show us we are not week but strong controlled by a hidden hand. We are imprisoned by the left right paradigm and uni-dimensional issues that are emotional hot buttons. These processes are studied to the nth degree and then applied to us without our knowledge. This is most likely the fabled truth that sets us free if we come to understand it.

The wicked witch is ours to destroy at any time if we muster the knowledge, the strength and the heart to do it.

I walk among the zombies everyday and try to comprehend why they are willingly blind to it. Would existence and society fall apart without this control mechanism? I'd prefer to think we'd rise to our betterment and see the fabled Utopia is under our feet already. Once I was blind. Now I can see. Bless you.