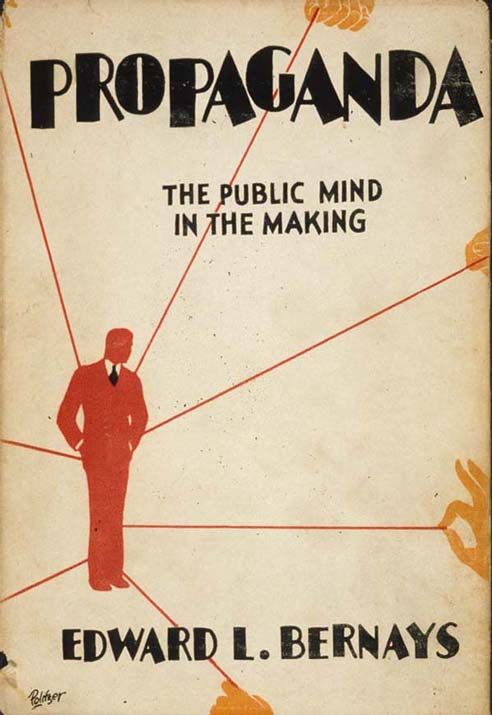 Propaganda, an influential book written by Edward L. Bernays in 1928, incorporated the literature from social science and psychological manipulation into an examination of the techniques of public communication. Bernays wrote the book in response to the success of some of his earlier works such as Crystallizing Public Opinion (1923) and A Public Relations Counsel (1927). Propaganda explored the psychology behind manipulating masses and the ability to use symbolic action and propaganda to influence politics, effect social change, and lobby for gender and racial equality. Walter Lippman was Bernays' unacknowledged American mentor and his work The Phantom Public greatly influenced the ideas expressed in Propaganda a year later. The work propelled Bernays into media historians' view of him as the "father of public relations."

Chapters one through six address the complex relationship between human psychology, democracy, and corporations. Bernays' thesis is that "invisible" people who create knowledge and propaganda rule over the masses, with a monopoly on the power to shape thoughts, values, and citizen response. "Engineering consent" of the masses would be vital for the survival of democracy. Bernays explains:

"The conscious and intelligent manipulation of the organized habits and opinions of the masses is an important element in democratic society. Those who manipulate this unseen mechanism of society constitute an invisible government which is the true ruling power of our country. We are governed, our minds are molded, our tastes formed, our ideas suggested, largely by men we have never heard of."

Bernays expands this argument to the economic realm, appreciating the positive impact of propaganda in the service of capitalism.

"A single factory, potentially capable of supplying a whole continent with its particular product, cannot afford to wait until the public asks for its product; it must maintain constant touch, through advertising and propaganda, with the vast public in order to assure itself the continuous demand which alone will make its costly plant profitable."

Bernays places great importance on the ability of a propaganda producer, as he views himself, to unlock the motives behind an individual's desires, not simply the reason an individual might offer. He argues, "Man's thoughts and actions are compensatory substitutes for desires which he has been obliged to suppress." Bernays suggests that propaganda may become increasingly effective and influential through the discovery of audiences' hidden motives. He asserts that the emotional response inherently present in propaganda limits the audience's choices by creating a binary mentality, which can result in quicker, more enthused responses. The final five chapters largely reiterate the concepts voiced earlier in the book and provide case studies for how to use propaganda to effectively advance women's rights, education, and social services.

Your concept of reality is a thought control program. There is no reality per se. The notorious men behind the curtain have induced you into believing their versions of the illusion. You'll fight for it, die for it and vie for it. The most difficult challenge you'll ever face is to discern this. Then comes the task of actually programming your own mind without the master's manipulations. That's the struggle. Jesus said, the truth would set us free. Indeed it will. That's why it is obscured by virtually everyone. I would prefer to know it and liberate my mind and soul from serfdom. So I openly discard the entrenched false paradigms. Most just replace another fabrication for the previous one. The illusion is the worst drug that the brain can ingest. There is hope. I'm finding my way.