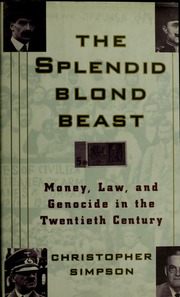 The Splendid Blond Beast: Money, Law and Genocide in the Twentieth Century

An investigative reporter and teacher of journalism, Christopher Simpson has long been interested in the Nazi period, having earlier written a book on America's alleged recruitment of war criminals after World War II. Now he looks at genocide, first of the Armenians by the Turks in 1915-18, but mostly the Nazi holocaust. He focuses on the American response to each, at high levels of the U.S. government. The research is serious and comprehensive. The resulting picture is not attractive. For a variety of reasons, which he condemns, humanitarian concerns are given a lower priority than other war aims. In confronting genocide, international law can offer only a rebuke. It is up to society, the author argues, not to offer rationalizations, as was done, and not to keep one's mouth shut. The reader's mind will immediately turn to Bosnia; a very timely book.