Defeat in the East: Russia conquers, January to May 1945 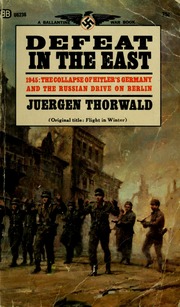 It appears the embed code doesn't work. It was a preview only.

This is a detailed account of atrocities and horrors of the eastern front. It will be found deeply disturbing. I was brought to tears in many spots, but this is WAR. There are no good guys just various types of bad evil if you will. However, the story must never be forgotten lest we march into the winter again.

It was the beginning of the end the final collapse of Hitler s glorious dreams Forbidden to surrender by their Fuehrer, forced to fight without supplies, without ammunition, the once invincible Wehrmacht was defeated by the fierce, grinding attack of 200 crack Red Army divisions.In that terrible winter of retreat 1944 1945 , humiliation and revenge, the Germans encountered the barbarian horde they had always feared Russian soldiers, eager for victory, and with old debts to pay, were on German soil, raping, burning and slaughtering in their final devastating drive to Berlin Originally Published as Flight in the Winter Edited and Translated by Fred Wieck.

War crimes of the Wehrmacht