Holy Bible, containing the Old and New Testaments with the Apocryphal books

Wycliffe's Bible is the name now given to a group of Bible translations into Middle English that were made under the direction of John Wycliffe. They appeared over a period from approximately 1382 to 1395. These Bible translations were the chief inspiration and chief cause of the Lollard movement, a pre-Reformation movement that rejected many of the distinctive teachings of the Roman Catholic Church. In the early Middle Ages, most Western Christian people encountered the Bible only in the form of oral versions of scriptures, verses and homilies in Latin (other sources were mystery plays, usually performed in the vernacular, and popular iconography). Though relatively few people could read at this time, Wycliffe's idea was to translate the Bible into the vernacular, saying "it helpeth Christian men to study the Gospel in that tongue in which they know best Christ's sentence".

Long thought to be the work of Wycliffe himself, the Wycliffe translations are now generally believed to be the work of several hands. Nicholas of Hereford is known to have translated a part of the text; John Purvey and perhaps John Trevisa are names that have been mentioned as possible authors. The translators worked from the Vulgate, the Latin Bible that was the standard Biblical text of Western Christianity, and the text conforms fully with Catholic teaching. They included in the testaments those works which would later be called the Apocrypha by most Protestants (referred to as deuterocanonical by Roman Catholics and some Anglicans), along with 3 Esdras (which is now called 2 Esdras) and Paul's epistle to the Laodiceans.

Although unauthorised, the work was popular. Wycliffe Bible texts are the most common manuscript literature in Middle English. More than 250 manuscripts of the Wycliffe Bible survive. One copy sold at auction on 5 December 2016 for US$1,692,500.

The association between Wycliffe's Bible and Lollardy caused the Kingdom of England and the established Catholic Church in England to undertake a drastic campaign to suppress it. In the early years of the 15th century Henry IV (in his statute De haeretico comburendo), Archbishop Thomas Arundel, and Henry Knighton published criticism and enacted some of the severest religious censorship laws in Europe at that time. Even twenty years after Wycliffe's death, at the Oxford Convocation of 1408, it was solemnly voted that no new translation of the Bible should be made without prior approval. However, as the text translated in the various versions of the Wycliffe Bible was the Latin Vulgate, and as it contained no heterodox readings,[citation needed] there was in practice no way by which the ecclesiastical authorities could distinguish the banned version; and consequently many Catholic commentators of the 15th and 16th centuries (such as Thomas More) took these manuscript English Bibles to represent an anonymous earlier orthodox translation. Consequently, manuscripts of the Wycliffe Bible, which when inscribed with a date always purport to precede 1409, the date of the ban, circulated freely and were widely used by clergy and laity. 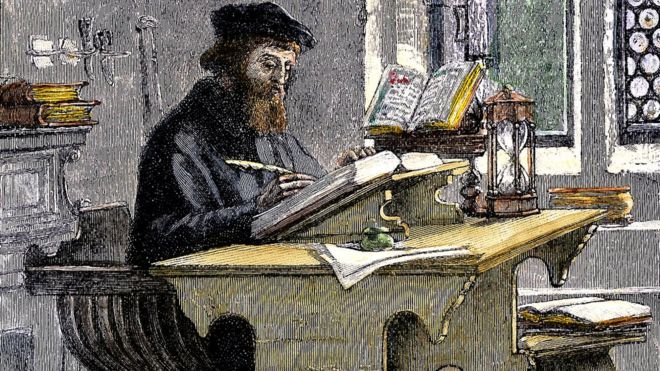