5 Treasure Story From Lardeau Country - C.P.R. lineman Walter Clough is one of the key figures in the story of "The Lost Mortar & Pestle Mine" - a mine that yielded incredibly high-grade gold ore.

Lardeau, originally spelled Lardo, is an unincorporated community and former mining town near the north end of Kootenay Lake in the West Kootenay region of southeastern British Columbia, Canada. The centre of a district known as the Lardeau mines, and as the Lardeau Country, Lardeau once had ambitions of becoming much larger, like Trout Lake City nearby on the lake of the same name, which forms a pass through to Galena Bay on Upper Arrow Lake, through which planned railways were to have turned Trout Lake and Lardeau into the great cities they were dreamed of becoming. Lardeau today is a mixed farming and logging community.

MEMORIES OF A GREAT BUT FORGOTTEN GOLDRUSH 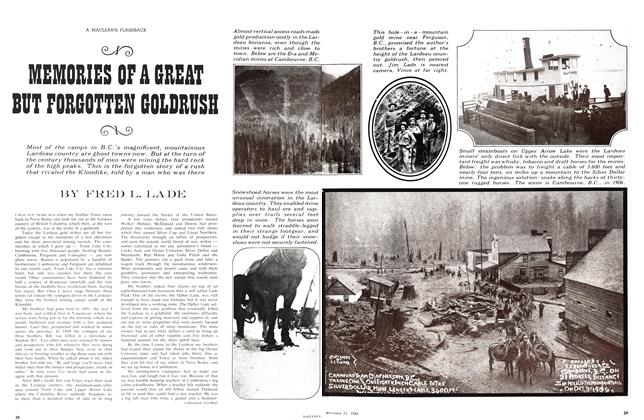