THE TIMES OF HARVEY MILK

TRAILER: THE TIMES OF HARVEY MILK from Cinefamily on Vimeo.

Looking at this event in hindsight there are many disturbing things not mentioned in the 'official' account which seems to build on a theme of yea or nay for homosexuality. The mayor and Milk were elected with the help of The Peoples Temple of Jim Jones. They bused in illegal voters. They funded the candidates. They had control of the governor and could demand audiences with the president. Jim Jones actually denounces the U.S. and sings the Soviet national anthem. He lunches with Dianne Feinstein now a senator. These are perilous times.

I have an issue with the evidence as well. Feinstein carried a gun the same make, model and caliber as Dan White a .38 caliber S&W Chief's revolver. There were two types of bullets used. MK Ultra cults were rampant back then and still are. Feinstein made the call to police. She was the first on the scene. She administered first aid by putting her fingers in the bullet holes. Yet both men were clearly executed with two shots to the head by the ear. She's lying. There's nothing to save. She gave her gun in for destruction a few years latter so that there can never be a ballistic examination. What if she did it? She argued with White and Moscone over the type of voting machines to be used. They wanted the Votomatic which can allow multiple votes as a flaw. After her rivals were removed from the scene her rise to prominence was unhindered. As the election nears new methods of interference revolve around bomb scares to ward off republican votes. This is an object lesson in life to be sure. Evil abounds in the shadows of everything. 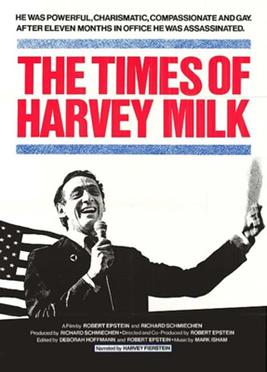 The Times of Harvey Milk is a 1984 American documentary film that premiered at the Telluride Film Festival, the New York Film Festival, and then on November 1, 1984 at the Castro Theatre in San Francisco. The film was directed by Rob Epstein, produced by Richard Schmiechen, and narrated by Harvey Fierstein, with an original score by Mark Isham.

In 2012, this film was deemed "culturally, historically, or aesthetically significant" by the United States Library of Congress and selected for preservation in the National Film Registry. 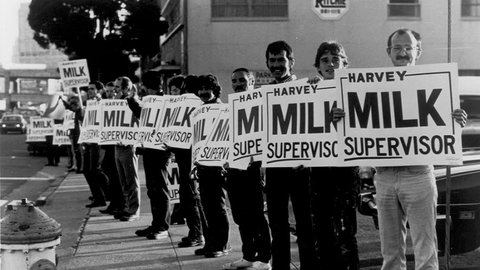 Harvey Bernard Milk (May 22, 1930 – November 27, 1978) was an American politician and the first openly gay elected official in the history of California, where he was elected to the San Francisco Board of Supervisors. Although he was the most pro-LGBT politician in the United States at the time, politics and activism were not his early interests; he was neither open about his sexuality nor civically active until he was 40, after his experiences in the counterculture movement of the 1960s.

On November 10, 1978 (10 months after he was sworn in), White resigned his position on the San Francisco Board of Supervisors, saying that his annual salary of $9,600 was not enough to support his family. Within days, White requested that his resignation be withdrawn and he be reinstated, and Mayor Moscone initially agreed. However, further consideration—and intervention by other supervisors—convinced Moscone to appoint someone more in line with the growing ethnic diversity of White's district and the liberal leanings of the Board of Supervisors. On November 18 and 19, news broke of the mass suicide of 900 members of the Peoples Temple. The cult had relocated from San Francisco to Guyana. California Representative Leo Ryan was in Jonestown to check on the remote community, and he was killed by gunfire at an airstrip as he tried to escape the tense situation. Dan White remarked to two aides who were working for his reinstatement, "You see that? One day I'm on the front page and the next I'm swept right off."

Moscone planned to announce White's replacement on November 27, 1978. A half hour before the press conference, White avoided metal detectors by entering City Hall through a basement window and went to Moscone's office, where witnesses heard shouting followed by gunshots. White shot Moscone in the shoulder and chest, then twice in the head. White then quickly walked to his former office, reloading his police-issue revolver with hollow-point bullets along the way, and intercepted Milk, asking him to step inside for a moment. Dianne Feinstein heard gunshots and called police, then found Milk face down on the floor, shot five times, including twice in the head. Soon after, she announced to the press, "Today San Francisco has experienced a double tragedy of immense proportions. As President of the Board of Supervisors, it is my duty to inform you that both Mayor Moscone and Supervisor Harvey Milk have been shot and killed, and the suspect is Supervisor Dan White." Milk was 48 years old. Moscone was 49.

Within an hour, White called his wife from a nearby diner; she met him at a church and was with him when he turned himself in. Many people left flowers on the steps of City Hall, and that evening 25,000 to 40,000 formed a spontaneous candlelight march from Castro Street to City Hall. The next day, the bodies of Moscone and Milk were brought to the City Hall rotunda where mourners paid their respects. Six thousand mourners attended a service for Mayor Moscone at St. Mary's Cathedral. Two memorials were held for Milk; a small one at Temple Emanu-El and a more boisterous one at the Opera House.

Daniel James White (September 2, 1946 – October 21, 1985) was a member of the San Francisco Board of Supervisors who killed San Francisco Mayor George Moscone and Supervisor Harvey Milk, on Monday, November 27, 1978, at City Hall. In a controversial verdict that led to the coining of the legal slang "Twinkie defense", White was convicted of manslaughter rather than murder in the deaths of Milk and Moscone. White served five years of a seven-year prison sentence. Less than two years after his release he returned to San Francisco and committed suicide.

The Peoples Temple Agricultural Project, better known by its informal name "Jonestown", was a remote settlement established by the Peoples Temple, an American sect under the leadership of reverend Jim Jones, in north Guyana. It became internationally notorious when, on November 18, 1978, a total of 918 people died in the settlement, at the nearby airstrip in Port Kaituma, and at a Temple-run building in Georgetown, Guyana's capital city. The name of the settlement became synonymous with the incidents at those locations.

909 individuals died in Jonestown, all but two from apparent cyanide poisoning, in an event termed "revolutionary suicide" by Jones and some members on an audio tape of the event and in prior discussions. The poisonings in Jonestown followed the murder of five others by Temple members at Port Kaituma, including United States Congressman Leo Ryan, an act that Jones ordered. Four other Temple members committed murder-suicide in Georgetown at Jones' command.

While some refer to the events in Jonestown as mass suicide, many others, including Jonestown survivors, regard them as mass murder. As many as 70 people may have been injected with poison, and a third of the victims (304) were minors. It was the largest such event in modern history and resulted in the largest single loss of American civilian life in a deliberate act until September 11, 2001.