Mysteries of the Bible - Masada: The Last Fortress 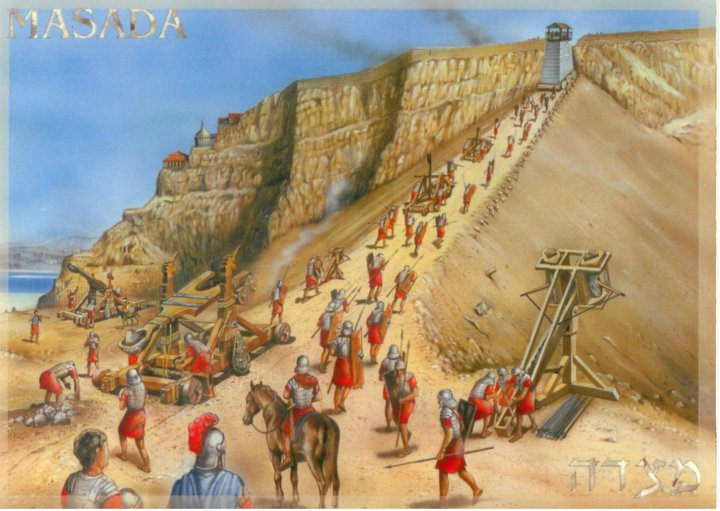 The siege of Masada was one of the final events in the First Jewish?Roman War, occurring from 73 to 74 CE on a large hilltop in current-day Israel. The siege was chronicled by Flavius Josephus, a Jewish rebel leader captured by the Romans, in whose service he became a historian. According to Josephus the long siege by the troops of the Roman Empire led to the mass suicide of the Sicarii rebels and resident Jewish families of the Masada fortress. Masada has become a controversial event in Jewish history, with some regarding it as a place of reverence, commemorating fallen ancestors and their heroic struggle against oppression, and others regarding it as a warning against extremism and the refusal to compromise.

Masada is "a lozenge-shaped table-mountain" that is "lofty, isolated, and to all appearance impregnable". The terrain made it difficult to reach the top of the mountain because there was only one narrow pathway, not even wide enough for two people to climb together. This pathway is known as "the Snake" because it "worms its way to the summit with many ingenious zig-zags". The fortress of Masada has been referred to as the place where David rested, after he "fled from his father-in-law, King Saul". 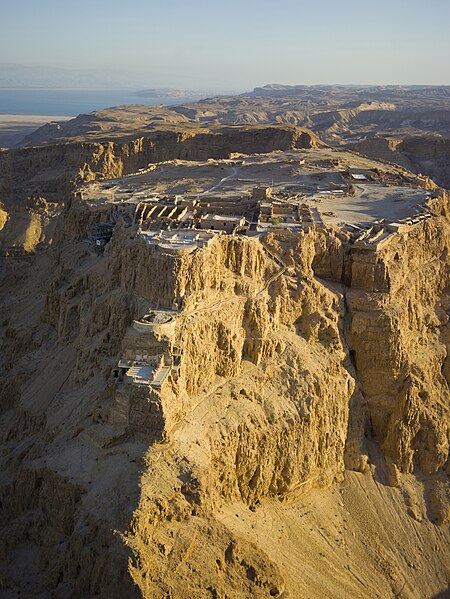 Flavius Josephus, a Jew born and raised in Jerusalem, is the only historian to provide a detailed account of the Great Jewish Revolt and the only person who recorded what happened on Masada. After being captured during the Siege of Yodfat and then freed by Vespasian, Josephus chronicled the Roman campaign. Josephus presumably based his narration on the field commentaries of the Roman commanders. According to Josephus, Masada was first constructed by the Hasmoneans. Between 37 and 31 BCE Herod the Great fortified it as a refuge for himself in the event of a revolt.

In 66 CE, at the beginning of the Great Jewish Revolt against the Roman Empire, a group of Jewish extremists called the Sicarii overcame the Roman garrison of Masada and settled there. The Sicarii were commanded by Eleazar ben Ya'ir, and in 70 CE they were joined by additional Sicarii and their families expelled from Jerusalem by the Jewish population with whom the Sicarii were in conflict. Shortly thereafter, following the Roman siege of Jerusalem and subsequent destruction of the Second Temple, additional members of the Sicarii and many Jewish families fled Jerusalem and settled on the mountaintop, with the Sicarii using it as a refuge and base for raiding the surrounding countryside. The works of Josephus are the sole record of the events that took place during the siege. According to modern interpretations of Josephus, the Sicarii were an extremist splinter group of the Zealots and were equally antagonistic to both Romans and other Jewish groups. It was the Zealots, in contrast to the Sicarii, who carried the main burden of the rebellion, which opposed Roman rule of Judea (as the Roman province of Iudaea, its Latinized name). According to Josephus, on Passover, the Sicarii raided Ein-Gedi, a nearby Jewish settlement, and killed 700 of its inhabitants.

Archaeology indicates that the Sicarii modified some of the structures they found there; these include a building that was modified to function as a synagogue facing Jerusalem (it may in fact have been a synagogue to begin with), although it did not contain a mikvah or the benches found in other early synagogues. It is one of the oldest synagogues in Israel. Remains of two mikvaot were found elsewhere on Masada.