This was a British mystery series. We always wonder what is behind the mysterious 'suicide.' The fact Whitehall, the British government, gets involved quickly explains a lot. I stumbled on this following an actress from The Avengers series. In later parts she plays Diana. Her name is Anne Godley. What predictive programming might arise from this cultish mystery? The CIA was not alone in the MK Ultra experiments. Neither should you be. 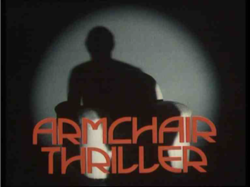 Armchair Thriller is a British television programme, broadcast on ITV in two series in 1978 and 1980. Owing something to some of the offshoots of the earlier Armchair Theatre, the new series used scripts adapted from published novels and stories. Although not properly a horror series it included several supernatural elements. Armchair Thriller was produced by Thames Television, but it included serials made by Southern Television. The format was of a twice weekly 25 minute episodes, usually screened on a Tuesday or Thursday at 20:00-21:00.

The opening titles consisted of a shadow-figure walking to an armchair and then sitting down, accompanied by music composed by Andy MacKay of pop group Roxy Music. Trailers for the series were equally memorable by showing an armchair soaked in blood and a screaming, maniacal face, which received criticism in that they were considered too horrific for pre-watershed viewing. Also significant was the Thames Television ident, which normally showed a London landscape in daytime, but for this series was changed to a night-time setting.

Amongst the first series was the story Quiet as a Nun. Starring Maria Aitken it introduced the character of Jemima Shore to television, who was later spun off into her own ITV series. This story proved to be particularly memorable, famous for its cliffhanger sequence of "The Black Nun". Rating increased, reaching a high of 17 million viewers during the broadcast of the first episode of The Limbo Connection. Other actors to appear included Ian McKellen and Denis Lawson.

The Army of God has a powerful ultra low frequency sound weapon. It turns physical material into an agitated state. It affects the brain and controls thoughts and emotions. It can actually drive someone mad. The music of Beethoven prevented the weapon from being effective. Anne Godley plays a bit role in the Army of God as a Lady Diana of all people. She was at the Ed Sullivan Show where The Beatles first appeared. Was the British invasion just that? Was a sound weapon deployed on the minds of the youth as the show revealed? The Army of God was committed to use the weapon on a mass audience. The Beatles recorded Roll Over Beethoven by the way. Are we all exposed to frequncies that affect us?

And tell Tchaikovsky the news

This weekend marks the 50th Anniversary of the Beatles first US appearance on the Ed Sulivan Show. Ann Godley was in the audience and talks with Boyd Clark and Drew Wilson about that night during Hoptown this morning on Oldies 96.5 WHVO. Ann is the third girl from the left.