December 7 is the 75th Anniversary of Pearl Harbor.

The Navy Court exonerated Admiral Kimmel of all charges and laid the blame squarely on Washington.

The Army Report closed with these words: "Up to the morning of December 7, 1941, everything that the Japanese were planning to do was known to the United States."

"Truthers" know the deficiencies in 9-11's official explanation and recognize it as a false flag. Some young people, however, are less acquainted with details of earlier false flags. 9-11 was only the latest entry in an historical pattern.

December 7 is "Pearl Harbor Day." On this day in 1941, the Japanese navy attacked the U.S. fleet at Pearl Harbor, damaging and/or sinking 18 ships and leaving thousands dead and wounded. This, of course, propelled America into World War II, an involvement which Americans had overwhelmingly opposed before then.

The Second World War accomplished several Illuminati objectives: world government via the UN with its World Bank/IMF subsidiaries; creation of Zionist Israel; and strengthening and spreading Communism over half the globe.

President Franklin D. Roosevelt and British Prime Minister Winston Churchill were old hands at false flags. During World War I, the Lusitania's contrived sinking inflamed American public opinion to join that war. Roosevelt had been assistant secretary of the Navy, and Churchill head of the British Admiralty.

As President, Roosevelt tried replicating the scenario by provoking Germany - e.g., having U.S. destroyers depth-charge U-boats. The Germans, however, refused the bait, remembering how U.S. entry into World War I had cost them that war.

Roosevelt therefore concentrated on Japan. Interior Secretary Harold Ickes said, "Our best entrance into the war would be by way of Japan."

Lt. Commander of Naval Intelligence Arthur McCollum presented the President with an eight-step plan of provocation against Japan, closing with these words: "If by these means Japan could be led to commit an overt act of war, so much the better."

July 1941 brought the most severe measures: The U.S. and Britain froze all Japanese assets, and embargoed trade, most critically oil. We shouldn't overlook that Germany and her allies had invaded the Soviet Union on June 22, 1941. The embargo effectively ensured that Japan, which had signed the anti-Comintern Pact with Germany, would not join the invasion but instead focus on Southeast Asia, where oil and rubber beckoned.

Stationed in Pearl Harbor, the U.S. Pacific fleet provided tempting bait. Our ships were isolated, boxed together like sardines, approachable by attackers from 360 degrees, and 2000 miles from supplies. Roosevelt fired Fleet Commander Admiral J. O. Richardson for protesting this absurd decision. The new commander, Admiral Husband Kimmel, took over assuming that Washington would keep him apprised of any threats - a trust that proved mistaken.

That autumn, after meetings with FDR, War Secretary Henry Stimson (CFR, Skull and Bones) wrote in his diary: "We face the delicate question of the diplomatic fencing to be done so as to be sure Japan is put into the wrong and makes the first bad move - overt move...The question was how we should maneuver them [the Japanese] into the position of firing the first shot...."

That autumn, after meetings with FDR, War Secretary Henry Stimson (CFR, Skull and Bones) wrote in his diary: "We face the delicate question of the diplomatic fencing to be done so as to be sure Japan is put into the wrong and makes the first bad move - overt move...The question was how we should maneuver them [the Japanese] into the position of firing the first shot...."

In 1940, U.S cryptanalysts had broken Japan's diplomatic code, "Purple," and were reading its messages, often on a same-day basis. The intercepts were regularly sent to President Roosevelt, Chief of Staff General George Marshall, and other high Washington officials - but not our commanders in Hawaii.

The intercepts revealed war was imminent, and that Japanese spies in Honolulu were reporting the exact locations of American warships in dock. Washington decoded Japan's declaration of war before their ambassadors presented it to Secretary of State Cordell Hull.

More recently it has been discovered that the United States also cracked Japan's naval code, and was translating its naval dispatches, including Admiral Yamamoto's directive to the Japanese First Air Fleet on November 26, 1941 to "advance into Hawaiian waters" and "attack the main force of the United States fleet and deal it a mortal blow."

Warnings of Japanese intentions to strike Pearl Harbor also came to the President from: our ambassador to Japan, Joseph Grew; FBI director J. Edgar Hoover (based on information from double agent Dusko Popov); Senator Guy Gillette (acting on a tip from the Korean underground), and Congressman Martin Dies. Chief of Staff George Marshall was forewarned of the attack by the U.S. military observer in Java, Brigadier General Elliot Thorpe, as well as by the Dutch Military attaché in Washington, Colonel F. G. L. Weijerman.

None of this information was conveyed to Pacific Fleet Commander Kimmel, or General Walter Short, the army commander in Hawaii. After the disaster, and war began, Americans and Congress demanded accountability. Why had our military been caught off guard?

President Roosevelt appointed an investigative body - the Roberts Commission, dominated by friendly acquaintances of himself and General Marshall. The Commission declared Washington had discharged its duties superlatively. It concluded the blame for Pearl Harbor lay with Admiral Kimmel and General Short, alleging they had failed to take adequate defensive and surveillance measures. Kimmel and Short were relieved of their commands as "DERELICTION OF DUTY" blazed on headlines across the country

Kimmel and Short protested the findings of the Roberts Commission, which had included unsworn and unrecorded testimony, denied them the privilege of attorneys, and numerous other irregularities. Kimmel and Short asked that they be court-martialed, so that the matter of Pearl Harbor could be resolved in a bona fide courtroom using established rules of evidence. Dreading this, the Roosevelt administration forbade trials "until such time as the public interest and safety would permit."

In 1944 a Congressional resolution mandated the trials. That August, the Navy Court of Inquiry and Army Pearl Harbor Board convened. At these proceedings, Kimmel's and Short's attorneys presented undeniable proof that Washington had complete foreknowledge of the Pearl Harbor attack. The Navy Court exonerated Kimmel of all charges and laid the blame squarely on Washington. The Army Pearl Harbor Board's report closed with these words: "Up to the morning of December 7, 1941, everything that the Japanese were planning to do was known to the United States." 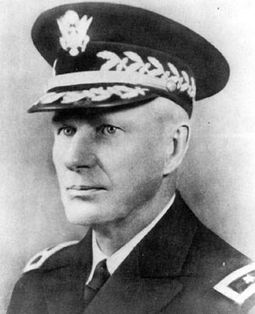 However, the American people did not learn the trial results, because the Roosevelt administration ordered the verdicts made confidential, pleading national security reasons. Meanwhile, 33rd-degree Freemason Roosevelt ordered NEW investigations to refute the trial results. In these "new" investigations, a number of officers - career military men with their futures now on the line - were persuaded to reverse their testimonies. The new investigations shifted the bulk of blame back to Kimmel and Short. Thus when the government finally released its findings, the public never understood what had happened. The man in charge of the army's investigation was Lieutenant Colonel Henry Clausen, who later became Sovereign Grand Commander of the Scottish Rite in the Southern Jurisdiction, same position Albert Pike held.

In September 2000 - one year before 9-11 - the Project for a New American Century (Richard Perle, Paul Wolofowitz, etc.) - issued a paper, "Rebuilding America's Defenses," calling for an increased U.S. military presence in the Middle East. But, it warned, the "transformation ...is likely to be a long one, absent some catastrophic and catalyzing event - like a new Pearl Harbor." In May 2001, as the 9-11 countdown began, Disney released its war-rallying Pearl Harbor starring Ben Affleck.