From the mid-1960s to early 1970s, Croce performed with his wife as a duo. At first, their performances included songs by artists such as Ian and Sylvia, Gordon Lightfoot, Joan Baez, and Woody Guthrie, but in time they began writing their own music. During this time, Croce got his first long-term gig at a suburban bar and steak house in Lima, Pennsylvania, called The Riddle Paddock. His set list covered several genres, including blues, country, rock and roll, and folk. 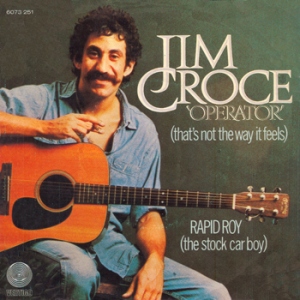 Croce married his wife Ingrid in 1966, and converted to Judaism, as his wife was Jewish. He and Ingrid were married in a traditional Jewish ceremony. He enlisted in the Army National Guard that same year to avoid being drafted and deployed to Vietnam, and served on active duty for four months, leaving for duty a week after his honeymoon. Croce, who was not good with authority, had to go through basic training twice. He said he would be prepared if "there's ever a war where we have to defend ourselves with mops".

In 1968, the Croces were encouraged by record producer Tommy West to move to New York City. The couple spent time in the Kingsbridge section of the Bronx and recorded their first album with Capitol Records. During the next two years, they drove more than 300,000 miles, playing small clubs and concerts on the college concert circuit promoting their album Jim & Ingrid Croce.

Becoming disillusioned by the music business and New York City, they sold all but one guitar to pay the rent and returned to the Pennsylvania countryside, settling in an old farm in Lyndell, where Croce got a job driving trucks and doing construction work to pay the bills while continuing to write songs, often about the characters he would meet at the local bars and truck stops and his experiences at work; these provided the material for such songs as "Big Wheels" and "Workin' at the Car Wash Blues".

They returned to Philadelphia and Croce decided to be "serious" about becoming a productive member of society. "I'd worked construction crews, and I'd been a welder while I was in college. But I'd rather do other things than get burned." His determination to be "serious" led to a job at a Philadelphia R&B AM radio station, WHAT, where he translated commercials into "soul". "I'd sell airtime to Bronco's Poolroom and then write the spot: "You wanna be cool, and you wanna shoot pool ... dig it."

In 1970, Croce met classically trained pianist-guitarist and singer-songwriter Maury Muehleisen from Trenton, New Jersey, through producer Joe Salviuolo. Salviuolo and Croce had been friends when they studied Villanova University, and Salviuolo had met Muehleisen when he was teaching at Glassboro State College in New Jersey. Salviuolo brought Croce and Muehleisen together at the production office of Tommy West and Terry Cashman in New York City. Croce at first backed Muehleisen on guitar, but gradually their roles reversed, with Muehleisen adding lead guitar to Croce's music.

In 1972, Croce signed a three-record contract with ABC Records, releasing two albums, You Don't Mess Around with Jim and Life and Times. The singles "You Don't Mess Around with Jim", "Operator (That's Not the Way It Feels)", and "Time in a Bottle" (written for his then-unborn son, A. J. Croce[citation needed]) all received airplay. Croce's biggest single, "Bad, Bad Leroy Brown", reached Number 1 on the American charts in July 1973. Also that year, the Croces moved to San Diego, California.

Croce began touring the United States with Muehleisen, performing in large coffee houses, on college campuses, and at folk festivals. However, Croce's financial situation was still bad. The record company had fronted him the money to record his album, and much of what it earned went to pay back the advance. In February 1973, Croce and Muehleisen traveled to Europe, promoting the album in London, Paris, and Amsterdam, receiving positive reviews. Croce now began appearing on television, including his national debut on American Bandstand[14] on August 12, 1972, The Tonight Show on August 14, 1972, The Dick Cavett Show on September 20/21 1972, The Helen Reddy Show airing July 19, 1973 and the newly launched The Midnight Special, which he co-hosted airing June 15. From July 16 through August 4, 1973, Croce and Muehleisen returned London and performed on The Old Grey Whistle Test. Croce finished recording the album I Got a Name just one week before his death. While on his tours, Croce grew increasingly homesick, and decided to take a break from music and settle with his wife and infant son when his Life and Times tour ended. In a letter to his wife which arrived after his death, Croce told her he had decided quit music and stick to writing short stories and movie scripts as a career, and withdraw from public life.

On Thursday, September 20, 1973, during Croce's Life and Times tour and the day before his ABC single "I Got a Name" was released, Croce, Muehleisen, and five others died when their chartered Beechcraft E18S crashed into a tree, while taking off from the Natchitoches Regional Airport in Natchitoches, Louisiana. Others killed in the crash were pilot Robert N. Elliott, comedian George Stevens, manager and booking agent Kenneth D. Cortose, and road manager Dennis Rast. Croce had just completed a concert at Northwestern State University's Prather Coliseum in Natchitoches and was flying to Sherman, Texas, for a concert at Austin College. The plane crashed an hour after the concert. Jim Croce was 30 years old. An investigation showed the plane crashed after clipping a pecan tree at the end of the runway. The pilot had failed to gain sufficient altitude to clear the tree and had not tried to avoid it, even though it was the only tree in the area. It was dark, but there was a clear sky, calm winds, and over five miles of visibility with haze. The report from the NTSB named the probable cause as the pilot's failure to see the obstruction because of his physical impairment and the fog reducing his vision. 57-year-old Elliott suffered from severe coronary artery disease and had run three miles to the airport from a motel. He had an ATP Certificate, 14,290 hours total flight time and 2,190 hours in the Beech 18 type. A later investigation placed the sole blame on pilot error due to his downwind takeoff into a "black hole"—severe darkness limiting use of visual references.

TIME IN A BOTTLE

I Got A Name

A Long Time Ago

IT DOESN'T HAVE TO BE THAT WAY