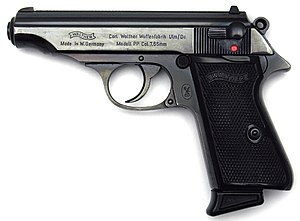 It features an exposed hammer, a traditional double-action trigger mechanism, a single-column magazine, and a fixed barrel that also acts as the guide rod for the recoil spring. The series includes the Walther PP, PPK, PPK/S, and PPK/E.

The PP and the PPK were among the world's first successful double action semi-automatic pistols and were widely copied, but are still made by Walther. The design inspired other pistols, among them the Soviet Makarov, the Hungarian FEG PA-63, and the Argentinian Bersa Thunder 380. The PP and PPK were both popular with European police and civilians, for being reliable and concealable. During World War II, they were issued to the German military, including the Luftwaffe, as well as the police.

A Walther PPK manufactured in 1968

The most common variant is the Walther PPK, a smaller version of the PP with a shorter grip, barrel, frame and reduced magazine capacity. The smaller size made it more concealable than the original PP and hence better suited to plainclothes or undercover work. It was released in 1931.

"PPK" is an abbreviation for Polizeipistole Kriminalmodell (Police Pistol Detective Model), "kriminal" referring to the police detective (criminal) division. Adolf Hitler shot and killed himself with his PPK (a 7.65mm/.32 ACP) in the Führerbunker in Berlin. The Walther PPK pistol is famous as fictional secret agent James Bond's gun in many of the films and novels: Ian Fleming's choice of the Walther PPK directly influenced its popularity and its notoriety. Fleming had given Bond a .25 Beretta 418 pistol in early novels, but switched to the PPK in Dr. No on the advice of firearms expert Geoffrey Boothroyd. 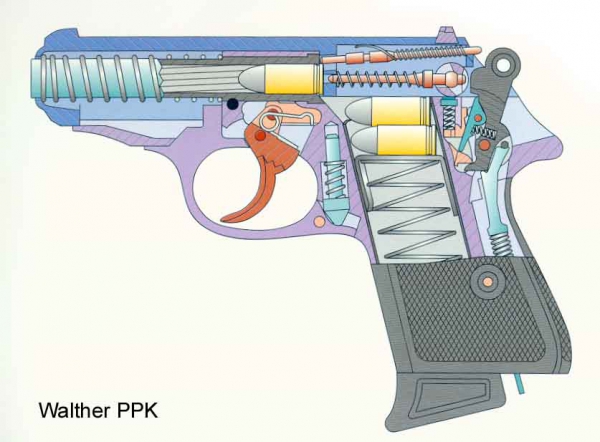 The PPK/S was developed following the enactment of the Gun Control Act of 1968 (GCA68) in the United States, the pistol's largest market. One of the provisions of GCA68 banned the importation of pistols and revolvers not meeting certain requirements of length, weight, and other "sporting" features into the United States. The PPK failed the "Import Points" test of the GCA68 by a single point. Walther addressed this situation by combining the PP's frame with the PPK's barrel and slide to create a pistol that weighed slightly more than the PPK. The additional ounce or two of weight of the PPK/S compared to the PPK was sufficient to provide the extra needed import points.

Because United States law allowed domestic production (as opposed to importation) of the PPK, manufacture began under license in the U.S. in 1945; this version was distributed by Interarms. The version currently manufactured by Smith & Wesson has been modified by incorporating a longer grip tang (S&W calls it "extended beaver tail"), better protecting the shooter from slide bite, i.e., the rearward-traveling slide's pinching the web between the index finger and thumb of the firing hand, which could be a problem with the original design for people with larger hands or an improper grip...