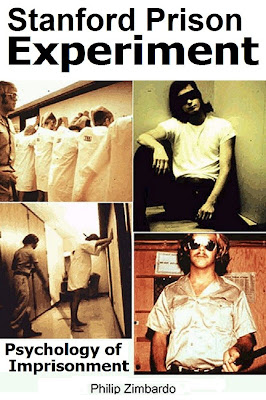 The Stanford prison experiment (SPE) was a study of the psychological effects of becoming a prisoner or prison guard. The experiment was conducted at Stanford University on August 14?20, 1971, by a team of researchers led by psychology professor Philip Zimbardo. It was funded by the U.S. Office of Naval Research and was of interest to both the U.S. Navy and Marine Corps as an investigation into the causes of conflict between military guards and prisoners. The experiment is a classic study on the psychology of imprisonment and is a topic covered in most introductory psychology textbooks.

The participants adapted to their roles well beyond Zimbardo's expectations, as the guards enforced authoritarian measures and ultimately subjected some of the prisoners to psychological torture. Many of the prisoners passively accepted psychological abuse and, at the request of the guards, readily harassed other prisoners who attempted to prevent it. The experiment even affected Zimbardo himself, who, in his role as the superintendent, permitted the abuse to continue. Two of the prisoners quit the experiment early, and the entire experiment was abruptly stopped after only six days, to an extent because of the objections of Christina Maslach. Certain portions of the experiment were filmed, and excerpts of footage are publicly available. 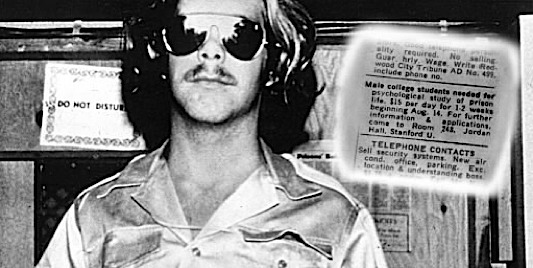 Zimbardo and his team aimed to test the hypothesis that the inherent personality traits of prisoners and guards are the chief cause of abusive behavior in prison. Participants were recruited and told they would participate in a two-week prison simulation. Out of 75 respondents, Zimbardo and his team selected the 24 males whom they deemed to be the most psychologically stable and healthy.These participants were predominantly middle class. The group was intentionally selected to exclude those with criminal backgrounds, psychological impairments, or medical problems. They all agreed to participate in a 7–14-day period and received $15 per day (equivalent to $87 in 2015).

After a relatively uneventful first day, on the second day the prisoners in Cell 1 blockaded their cell door with their beds and took off their stocking caps, refusing to come out or follow the guards' instructions. Guards from other shifts volunteered to work extra hours, to assist in subduing the revolt, and subsequently attacked the prisoners with fire extinguishers without being supervised by the research staff. Finding that handling nine cell mates with only three guards per shift was challenging, one of the guards suggested they use psychological tactics to control them. They set up a "privilege cell" in which prisoners who were not involved in the riot were treated with special rewards, such as higher quality meals. The "privileged" inmates chose not to eat the meal in commiseration with their fellow prisoners. After only 36 hours, one prisoner began to act "crazy", as Zimbardo described: "#8612 then began to act crazy, to scream, to curse, to go into a rage that seemed out of control. It took quite a while before we became convinced that he was really suffering and that we had to release him."

On August 20, 1971, Zimbardo announced the end of the experiment to the participants. The experiment has also been used to illustrate cognitive dissonance theory and the power of authority.

The results of the experiment favor situational attribution of behavior rather than dispositional attribution (a result caused by internal characteristics). In other words, it seemed that the situation, rather than their individual personalities, caused the participants' behavior. Under this interpretation, the results are compatible with the results of the Milgram experiment, in which ordinary people fulfilled orders to administer what appeared to be agonizing and dangerous electric shocks to a confederate of the experimenter.

Shortly after the study was completed, there were bloody revolts at both the San Quentin and Attica prison facilities, and Zimbardo reported his findings on the experiment to the U.S. House Committee on the Judiciary.