Tales of the Gun Ep. 24 Guns of Israel

The STEN (or Sten gun) was a family of British submachine guns chambered in 9×19mm and used extensively by British and Commonwealth forces throughout World War II and the Korean War. They were notable for having a simple design and very low production cost making them effective insurgency weapons for resistance groups.

STEN is an acronym, from the names of the weapon's chief designers, Major Reginald V. Shepherd and Harold Turpin, and EN for Enfield. Over 4 million Stens in various versions were made in the 1940s. 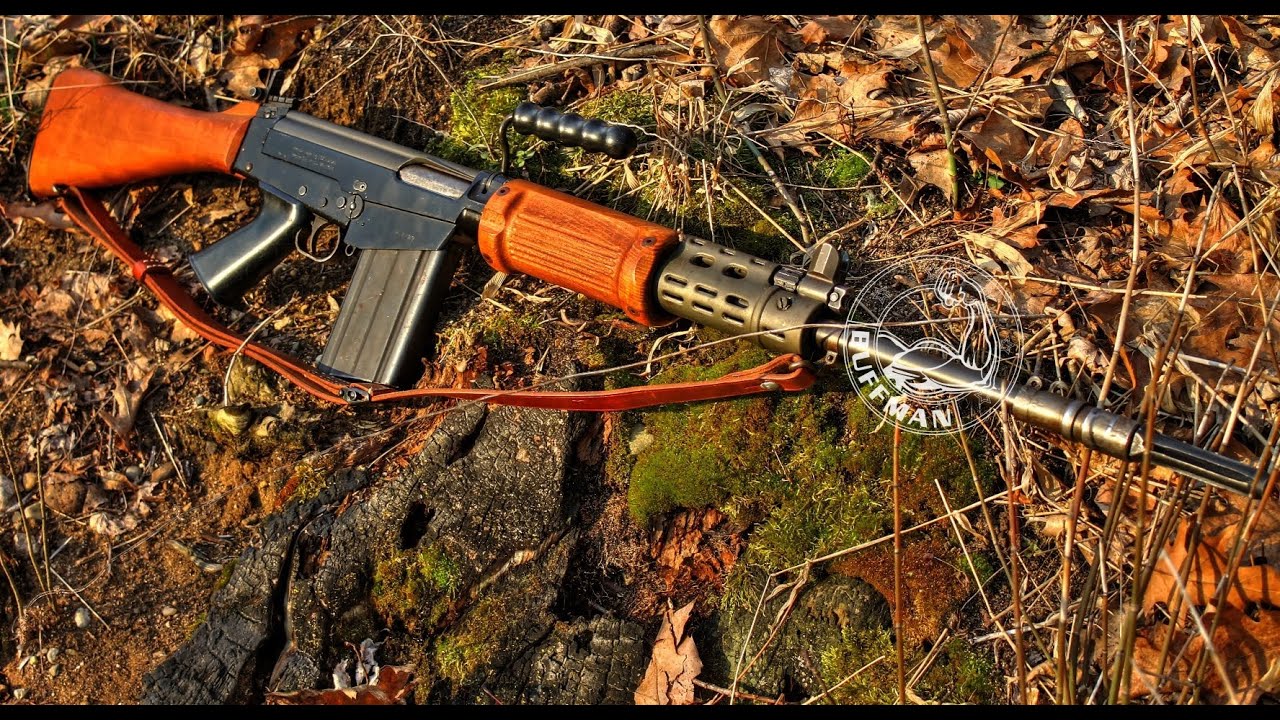 The Fusil Automatique Léger ("Light Automatic Rifle") or FAL is a semi-automatic/selective fire battle rifle produced by the Belgian armaments manufacturer Fabrique Nationale de Herstal (FN). During the Cold War it was adopted by many North Atlantic Treaty Organization (NATO) countries, with the notable exception of the United States. It is one of the most widely used rifles in history, having been used by more than 90 countries.

The FAL was predominantly chambered for the 7.62×51mm NATO round, and because of its prevalence and widespread use among the armed forces of many NATO countries during the Cold War it was nicknamed "The right arm of the Free World".

The Uzi (Hebrew: עוזי‎, officially cased as UZI) pronunciation: /ˈuːzi/ is a family of Israeli open-bolt, blowback-operated submachine guns. Smaller variants are considered to be machine pistols. The Uzi was one of the first weapons to use a telescoping bolt design which allows the magazine to be housed in the pistol grip for a shorter weapon.

The first Uzi submachine gun was designed by Major Uziel Gal in the late 1940s. The prototype was finished in 1950. First introduced to IDF special forces in 1954, the weapon was placed into general issue two years later. The Uzi has found use as a personal defense weapon by rear-echelon troops, officers, artillery troops and tankers, as well as a frontline weapon by elite light infantry assault forces.

The Jericho 941 is a double-action/single-action semi-automatic pistol developed by Israel Military Industries (now: Israel Weapon Industries) that was launched in 1990.

The original Jericho 941 was modeled on the well-respected CZ-75 pistol designed and produced by Česká zbrojovka (CZ) of the Czech Republic and built using parts supplied by the Italian arms house Tanfoglio, which had been making their own CZ-75 clones. Using a well-tested design allowed IMI to avoid the teething problems most new pistol designs experience, and subcontracting much of the basic fabrication work to Tanfoglio allowed IMI to quickly and economically put into production a pistol that would have enough Israeli content to satisfy government contract requirements

The Galil is a family of Israeli small arms designed by Yisrael Galil and Yaacov Lior in the late 1960s and produced by Israel Military Industries Ltd (now Israel Weapon Industries Ltd) of Ramat HaSharon. The rifle design borrowed heavily from the AK-47 and had a modified gas diversion system similar to the AK-47 to reduce the recoil of the rifle making it easier to fire especially in automatic mode.[2] The weapon system consists of a line chambered for the intermediate 5.56×45mm NATO caliber with either the M193 or SS109 ball cartridge and several models designed for use with the 7.62×51mm NATO rifle round. It is named after one of its inventors, Yisrael Galil. The Galil series of weapons is in use with military and police forces in over 25 countries.

The Negev is an Israeli 5.56 mm and 7.62 mm light machine gun, developed by Israel Military Industries Ltd. (IMI) of Ramat HaSharon (now Israel Weapon Industries), as a replacement for the 5.56 mm Galil ARM light machine gun, whose barrel would overheat easily during sustained fire. Design work on this new indigenous firearm began in 1985, it was inspired by the Belgian FN Minimi, and it was officially adopted by the Israeli Defense Forces (IDF) in 1997. In 2012, IWI introduced the new Negev NG7, in 7.62mm calibre, to become the standard issue for the IDF. The TAR-21 (or simply Tavor) is an Israeli bullpup assault rifle chambered for 5.56×45mm NATO ammunition with a selective fire system, selecting between semi-automatic mode and full automatic fire mode.