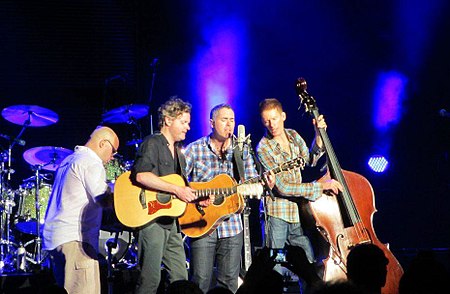 Barenaked Ladies (often abbreviated BNL or occasionally BnL) is a Canadian rock band. The band is currently composed of Jim Creeggan, Kevin Hearn, Ed Robertson, and Tyler Stewart. Barenaked Ladies formed in 1988 in Scarborough, Ontario (now incorporated into the City of Toronto) as a duo of Robertson and Steven Page. Jim Creeggan and his brother Andrew "Andy" Creeggan joined at the end of 1989, and Stewart was added in 1990 while Andy was on a brief hiatus from the group. Andy left the band in 1995 and was replaced by Hearn. Page left the group in 2009.

Upon forming, the band quickly developed a cult following in their native Canada culminating in its self-titled 1990 cassette becoming the first independent release ever to be certified gold in Canada, and the band receiving a major record deal with Reprise Records. Its label debut, Gordon was released in 1992. Andy Creeggan left the band after its second album in 1995 and was replaced by Hearn. Page left in 2009 leaving the group as a quartet. "Lovers in a Dangerous Time" is a song by Bruce Cockburn, originally released on his 1984 album Stealing Fire. The song was a Top 40 hit for Cockburn, peaking at No. 25 on the Canadian charts the week of August 18, 1984.