Doomsday Preppers S3 E7 We are the Marauders

This is a controverial episode since National Geographic used a convicted felon, and he possessed a firearm. His plan was to rob to survive. Many will mimic that plan I'm sure. I advocate Christian prepping where we plan to share and work together. We will see into the robber's mind here. They also illustrate dealing with medical emergencies. You may have to. We used to joke and call it the home surgery club at work. However, that's all you might have. Do stock up on first aid supplies and take a course on it. 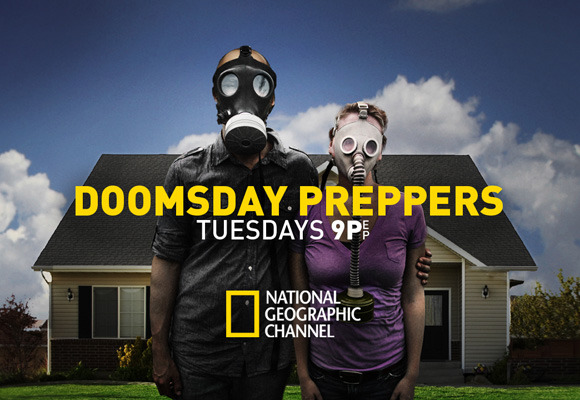 In Tacoma, Wash., Tyler and his followers have put back some prepper supplies, and they have a remote, 15-acre farm, but they plan to become marauders after a catastrophic terrorist attack and the subsequent imposition of martial law. They plan to attack other preppers in the area ? Tyler is making a map ? to take their stores of food, supplies, weapons and ammunition. To that end, they are building homemade body armor from bathroom tiles wrapped in fiberglass and duct tape, and coated with roofing tar, combined with plates of scrap metal and old metal fence. Tyler has tested the prototype by strapping it on and having his cousin Chris shoot him in the stomach with a 12-gauge shotgun.

Tyler also expect the military to take control of hospitals, where he expects they would arrest and detain an "apex predator" – his words – like him. So, he's been reading books on medicine and surgery, and laying in stocks of rudimentary medical supplies. If his catastrophe happens before his pregnant wife gives birth, he plans to then do a C-section on her in his barn, which he will sanitize by laying down some plastic sheeting.

Kevin has moved his family from a suburban neighborhood in Kansas to Costa Rica "to escape America's economic collapse" and the worldwide impact that will have. He believes Costa Rica offers a more self-reliant, basic way of life. That appears to be an accurate assessment of the Central American country, where the electrical grid already fails Kevin regularly, even before the collapse of the U.S. dollar.

He has about 18 months of supplies stored away, but also has added chickens, a garden and an aquaponics system for tilapia and vegetables. He powers that system with solar energy. In addition to supplying high-quality protein for the family, Kevin plans to use the fish in a local bartering system after money has no value. He and his family are learning Spanish to become part of the "us" of the local Spanish-speaking community rather than remaining "a them" in the event of a catastrophe.

The show's expert assessors noted that both scenarios for which tonight's preppers were preparing are highly unlikely. They appreciated the creativity Tyler put into creating his body armor, but really said nothing about its effectiveness. They also suggested he might want to become part of the solution in a post-apocalyptic world rather than create new problems.

Kevin, they said, needs to add backup pumps and plumbing supplies to support and maintain his aquaponics system.

Tyler seems to have a Road Warrior fantasy about the future, with him as the dominant warrior and leader of the pack. He probably won't survive more than one or two marauding missions against neighboring preppers. His armor protects some of his vital organs and much of his head, but leaves about 60-70 percent of his body open to attack.

The show didn't really give much information about his would-be gang members, so it's difficult to assess the overall survival rate of the group after the collapse of society. Their leader has sort of given away the element of surprise they may have had over the other preppers in their area that they plan to raid and pillage.

Kevin's choice of a Central American country as his refuge from a worldwide collapse of society and systems might be questioned given that some travel websites and some nations have issued warnings to tourists of serious and violent crime in Costa Rica.

Tyler Smith, the leader of the "Marauders" featured in this episode was arrested and booked on two counts of second-degree unlawful possession of a firearm because he was a previously convicted child sex offender and was legally barred from possessing firearms. During the episode, Smith also described his plans to commit armed robbery in the episode. Asked for comment on Smith’s arrest, National Geographic issued a statement stating: "We are aware of the arrest, and have decided not to air this episode until all legal matters are sorted out." The episode was eventually aired.