On the 70th anniversary of Bob Marley's birth celebrate by emancipating yourself from mental slavery. It's all that we can ask

Robert Nesta "Bob" Marley OM (6 February 1945 ? 11 May 1981) was a Jamaican reggae singer-songwriter, musician, and guitarist who achieved international fame and acclaim. Starting out in 1963 with the group the Wailers, he forged a distinctive songwriting and vocal style that would later resonate with audiences worldwide. The Wailers would go on to release some of the earliest reggae records with producer Lee Scratch Perry. After the Wailers disbanded in 1974, Marley pursued a solo career which culminated in the release of the album Exodus in 1977 which established his worldwide reputation and produced his status as one of the world's best-selling artists of all time, with sales of more than 75 million records. He was a committed Rastafari who infused his music with a sense of spirituality. 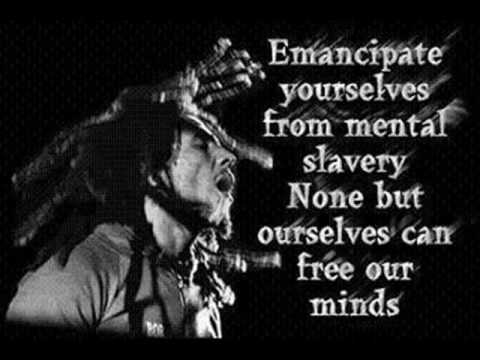 "Redemption Song" is a song by Bob Marley. It is the final track on Bob Marley & the Wailers' ninth album, Uprising, produced by Chris Blackwell and released by Island Records.[2] The song is considered one of Marley's greatest works. Some key lyrics derived from a speech given by the Pan-Africanist orator Marcus Garvey.

At the time he wrote the song, circa 1979, Bob Marley had been diagnosed with the cancer in his toe that later was to take his life. According to Rita Marley, "he was already secretly in a lot of pain and dealt with his own mortality, a feature that is clearly apparent in the album, particularly in this song".

The song urges listeners to "Emancipate yourself from mental slavery," because "None but ourselves can free our minds". These lines were taken from a speech given by Marcus Garvey in Nova Scotia during October 1937 and published in his Black Man magazine:

We are going to emancipate ourselves from mental slavery because whilst others might free the body, none but ourselves can free the mind. Mind is your only ruler, sovereign. The man who is not able to develop and use his mind is bound to be the slave of the other man who uses his mind ...

Bob Marley Get Up Stand Up

Bob Marley - Stir it up

Jesus said many things would come to pass.

5 "For many will come in My name, saying, 'I am the Christ,' and will mislead many.

6 "You will be hearing of wars and rumors of wars. See that you are not frightened, for those things must take place, but that is not yet the end.

7 "For nation will rise against nation, and kingdom against kingdom, and in various places there will be famines and earthquakes.…