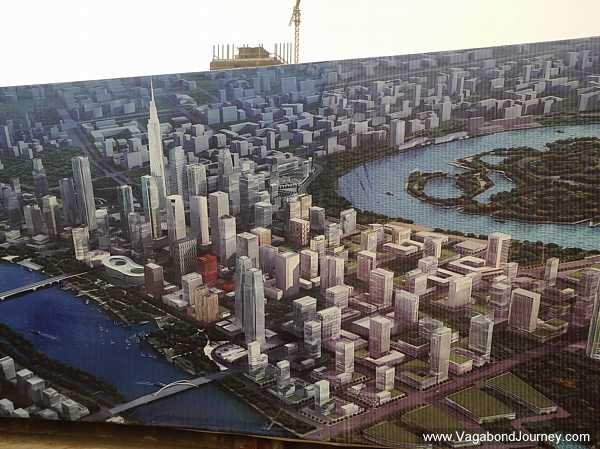 “You are building Manhattan,” I joked with a group of construction workers in what is becoming Tianjin’s new financial district. He nodded his head and smiled as we stood together, peering out at a tight phalanx of half built skyscrapers that now command a tight bend on the Hai River, one tick from the East China Sea. There was no jest here though, this wasn’t a joke, this was for real: he really was building Manhattan. Well, a Chinese version of it anyway.

Apparently not content with allowing New Yorkers to remain the sole beneficiaries of their city, a group of enterprising developers and government officials have engaged upon the most extensive and ambitious knock-off in human history: the creation of a Manhattan themed financial district — in China. The bounds of geography, culture, and history are no match for this rising superpower which takes architectural designs and urban layouts from around the world like plucking fruit from a tree. 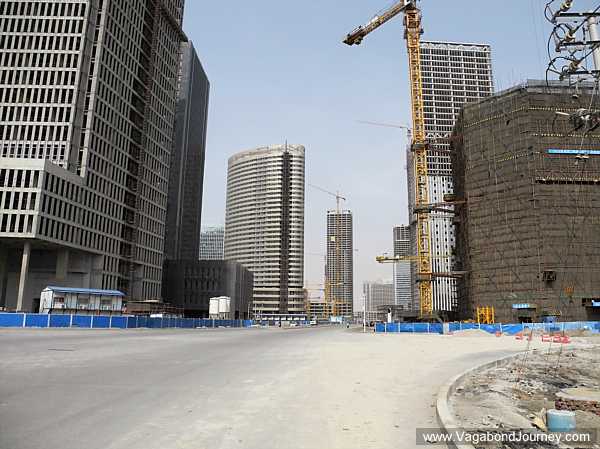 The Chinese version of Manhattan’s business district (FiDi) is called Yujiapu (于家堡;), and it is slowly arising out of the heart of Bīnhǎi New District (滨海新区;), which itself is a new area of Tianjin, a provincial level municipality 85 miles from Beijing. In 2008, an ancient fishing village was swept off the face of the earth and a forest of skyscrapers were planted in its place. Scheduled for completion in 2019, Yujiapu isn’t just a copy of Manhattan’s FiDi, but is set to be even larger than the original. At 3.86 sq km in area, it is to become the “largest single financial center on the world.” So not only is this a colossal knock off, it’s a colossal development in its own right.

When finished, Yujiapu and the area across the Hai River immediately adjacent to it is slated to provide 15.2 million square meters (164 million square feet) of office space. Though larger in surface area, Yujiapu only intends to offer a little over a third of Manhattan’s business capacity.

Perhaps not content with copying handbags and mobile phones, the Chinese are replicating entire buildings, villages, and now, entire city districts. Hallstatt, a near exact copy of the Austrian hamlet of the same name, has now opened to visitors in Guangdong province. Shanghai is reenacting its colonial past and has built entire new districts designed to look like England, Paris, Germany, Holland, and Sweden, respectively. Even the relatively insignificant city of Taizhou has their own British knock-off town. Huaxi, dubbed the world’s richest village, has not allowed itself to be undone by other copycats, and has made an entire theme park of knock-off landmarks from around the world. 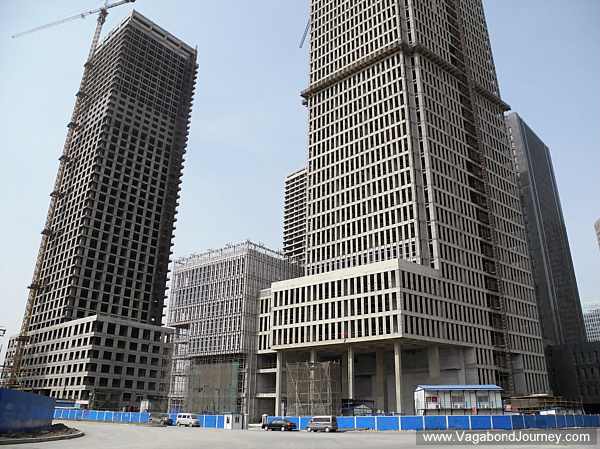 Though Yujiapu is something that has never been done to this extent before: the DNA of an entire district of a city has been replicated and given life on the opposite side of the globe. The Atlantic reported that, “The miniature city is a near facsimile of New York–down to the river wrapping around the peninsula’s southern tip.” The Rockefeller Center is in the process of being cloned, and there is an identical pair of skyscrapers going up that very much resemble the twin towers of the original World Trade Center.

But these plans were not half-baked in some shady corner of a half-rate, cut and paste architectural sweatshop; no, China has called in teams of bona-fide first stringers for this game. The Rockefeller Center replica and Yujiapu Twin Towers are being handled by Yinfeini Property, the China side subsidiary of Tishman Speyer — the architectural firm that built the original World Trade Center and are currently in the process of completing 1 WTC. The Rockefellers are likewise not standing idly by as a copycat of the building that bears their legacy is being erected in China; nope, their Rose Rock Group is helping mint Yujiapu’s centerpiece: a 588 meter high tower that will be even taller than 1 WTC, which itself is set to become the tallest building in the western hemisphere. The Lincoln center is also in the fray, helping design Yujiapu’s performing arts center. So not only is Yujiapu being built to resemble Manhattan, it is being built by some of the same firms who made the original.

This all sounded to me like something out of a Vonnegut novel, and I have to admit that I could not shake the feeling of suspended reality as I crossed a bridge and passed through the skyscraper gates of Yujiapu. I found myself in an entire city that was in the process of coming to life. Work crews were racing here and there, up scaffolding, down freight elevators. It was like being among a colony of ants building up a concrete nest all around me. The grey, fixture-less, concrete skeletons of skyscrapers rose over dirt roadways, and at each turn these towers of bones continued on and on. Their sides were speckled with dark, windowless cavities, and the effect was like looking upon a stack of skulls lining the path to some heart of darkness. 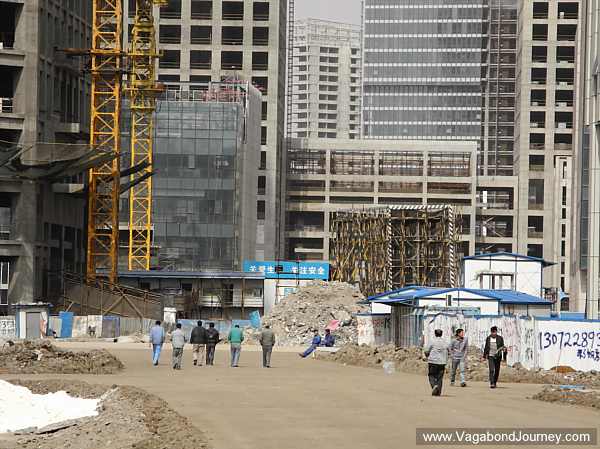 Everything in sight was in the process of being built, there were no temporal bearings anywhere, this entire city was morphing and changing as I watched. This rising colony of finance was remarkable. I’ve been in new cities in China that were in the process of being built before, but I’ve never experienced anything on this scale. These were massive skyscrapers, not mere high-rises. In fact, one of these fledgling towers will someday be one of the largest structures on the planet. What I was looking at was a live-action snapshot of something historic in the making — something which seems to represent the rise of China as a whole. Yujiapu is slated to be one of this country’s prime financial centers, and its incredible scale and scope provokes the same worn questions to be ask: 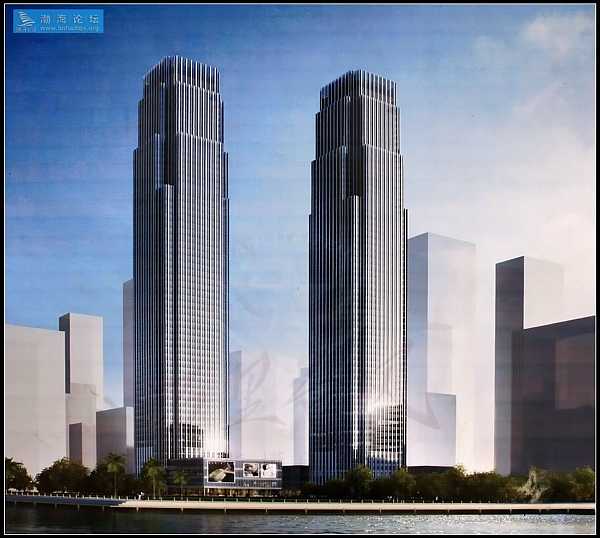 Is this a historic success story in the making?

Is this a historic flop waiting to happen?

Whatever the case ends up being, a monument is in the works at Yujiapu: a spindly, concrete one that should give us a dose of deja vu.

“This is the key project of all our projects in China,” a partner at Luo Si Luo Ke (The Rockefeller Group’s Chinese subsidiary) told CNN, “at the moment, no other project is more important than this.”

In early March of this year, the news program “60 Minutes” released a report declaring that construction at Yujiapu had ground to a halt. My visit was mere weeks after this report aired, and their take couldn’t have been further from the truth. Yujiapu is not stagnant, it is rising steadily, piece by piece, floor by floor, tower by tower. Though I have to admit that the construction did not seem to be going full tilt, and the amount of workers that I observed did not appear adequate for completing a city of this magnitude anytime soon. But the fact remains that Yujiapu has not been abandoned, it has not been deserted, it is still being actively constructed. 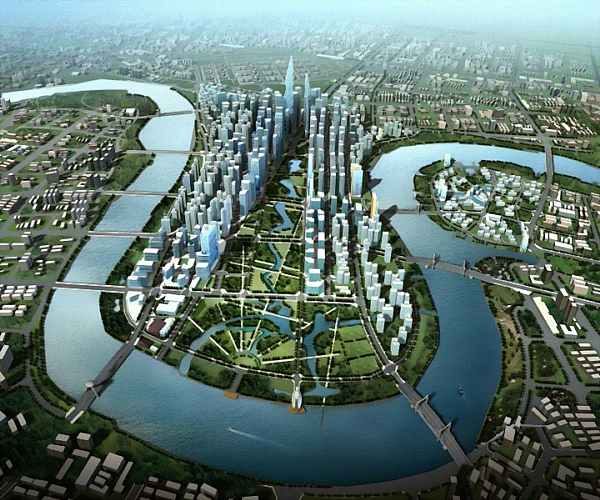