CONSPIRACY NIGHT AT THE MOVIES: Nanking

This is a difficult topic, but it is the reality of war. Our leaders relish it as the aphrodisiac of total power. They don't have to fight them though. I read the book The Rape of Nanking. It was a powerful testimony not taught to our youth. The missionaries and diplomats formed a protective square and encapsulated thousands who survived. The two American surgeons worked long hours. One worked himself to death. The nurses fended off the rape parties at night after long shifts tending patients. You talk about heroes. This was history. The lesson is to never let things like this happen again especially with CIA contract armies. You will never be the same understanding this, but after Satan tries his best, there is the love of Christ. Which do you choose? 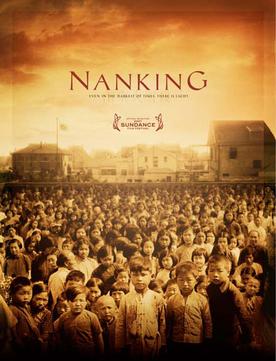 Nanking is a 2007 film about the 1937 Nanking Massacre committed by the Japanese army in the former capital city Nanjing, China. The film draws on letters and diaries from the era as well as archive footage and interviews with surviving victims and perpetrators of the massacre. Contemporary actors play the roles of the Western missionaries, professors, and businessmen who formed the Nanking Safety Zone to protect the city's civilians from Japanese forces. Particular attention is paid to John Rabe, a German businessman who organized the Nanking Safety Zone, Robert O. Wilson, a surgeon who remained in Nanking to care for legions of victims, and Minnie Vautrin, a missionary educator who rendered aid to thousands of Nanking's women.

In the winter of 1937, the Japanese army occupied Nanking and killed over 200,000 and raped tens of thousands of Chinese people, one of human history's worst atrocities. In order to protect Chinese civilians, a small group of European and American expatriates, Western missionaries, professors, and businessmen banded together to save 250,000, risking their own lives.

The film describes the Nanking Massacre by reading from letters and diaries which shows the activities of John Rabe (Jürgen Prochnow), a German businessman, Robert O. Wilson (Woody Harrelson), the only surgeon remaining to care for legions of victims, and Minnie Vautrin (Mariel Hemingway), an educator who passionately defends the lives and honor of Nanking's women during the war time.

The film includes survivors who tell their own stories, the archival footage of the events, and the testimonies of Japanese soldiers who participated in the rampage. Boys will be boys

The Nanking Massacre, also known as the Rape of Nanking, was an episode of mass murder and mass rape committed by Japanese troops against the residents of Nanking (current official spelling: Nanjing) during the Second Sino-Japanese War. The massacre occurred during a six-week period starting from December 13, 1937, the day that the Japanese captured Nanking, which was then the Chinese capital (see Republic of China). During this period, between 40,000 to over 300,000 (estimates vary) Chinese civilians and disarmed combatants were murdered by soldiers of the Imperial Japanese Army. Widespread rape and looting also occurred. Several of the key perpetrators of the atrocities, at the time labelled as war crimes, were later tried and found guilty at the International Military Tribunal of the Far East and the Nanjing War Crimes Tribunal, and were executed. Another key perpetrator, Prince Asaka, a member of the Imperial Family, escaped prosecution by having earlier been granted immunity by the Allies.

There's a reason only the police and the military should have all the arms. The BIG BAD WOLF would say, "The better to shoot YOU with." There was a report in the book about one man with a hunting gun. He killed a few Japanese before he died. If there were a million of them, would the War in the Pacific ever happened? When they come after the guns, they used the adage if it saves just one life, but at what total cost when the day comes you need them?

BEHEADING IS NOTHING NEW. ISIS DIDN'T INVENT IT. Back in the day the media was very silent about the Japanese invasion in China. It didn't fit the politics quite yet. The Japanese had beheading contests. They were front page news back home.