The Karabiner 98 Kurz (often abbreviated Kar98k, K98, or K98k) is a bolt action rifle chambered for the 7.92×57mm Mauser cartridge that was adopted in 1935 as the standard service rifle by the German Wehrmacht. It was one of the final developments in the long line of Mauser military rifles. Although supplemented by semi- and fully automatic rifles during World War II, it remained the primary German service rifle until the end of World War II in 1945. Millions were captured by the Soviets at the conclusion of World War II and were widely distributed as military aid. The Karabiner 98k therefore continues to appear in conflicts across the world as they are taken out of storage during times of strife.

The Karabiner 98k was derived from earlier rifles, namely the Mauser Standardmodell and the Karabiner 98b, which in turn had both been developed from the Gewehr 98. Since the Karabiner 98k rifle was shorter than the earlier Karabiner 98b (the 98b was a carbine in name only, a version of Gewehr 98 long rifle with upgraded sights), it was given the designation Karabiner 98 Kurz, meaning "Carbine 98 Short". Just like its predecessor, the rifle was noted for its reliability, great accuracy and an effective range of up to 500 metres (550 yd) with iron sights and 1,000 metres (1,090 yd) with an 8× telescopic sight.

The Karabiner 98k is a controlled-feed bolt-action rifle based on the Mauser M 98 system. Its internal magazine could be loaded with five 7.92×57mm Mauser cartridges from a stripper clip or one-by-one. The straight bolt handle found on the Gewehr 98 bolt was replaced by a turned-down bolt handle on the Karabiner 98k. This change made it easier to rapidly operate the bolt, reduced the amount the handle projected beyond the receiver, and enabled mounting of aiming optics directly above the receiver on the Karabiner 98k. Each rifle was furnished with a short length of cleaning rod, fitted through the bayonet stud. The joined rods from 3 rifles provided one full-length cleaning rod. 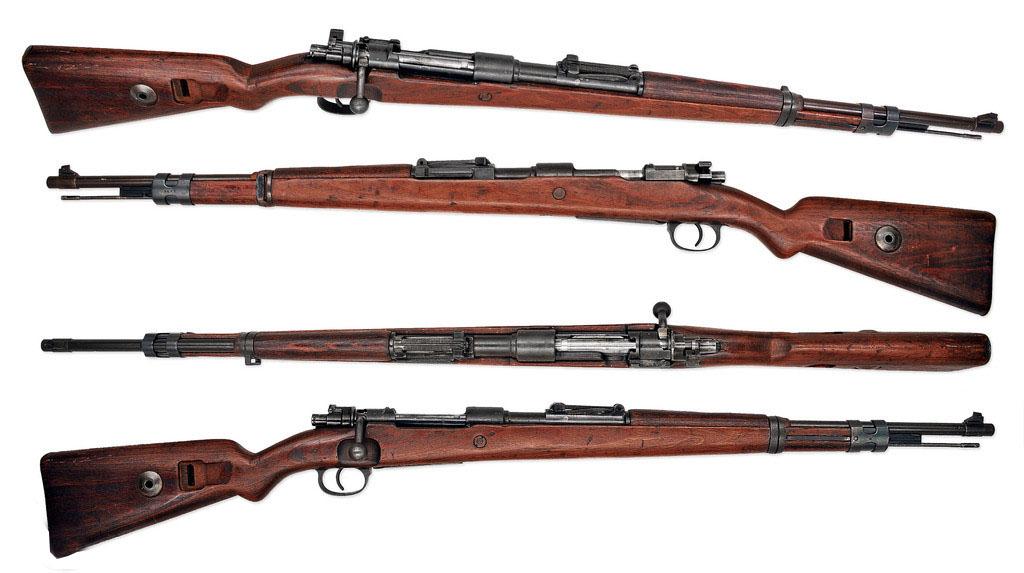 The metal parts of the rifle were blued, a process in which steel is partially protected against rust by a layer of magnetite (Fe3O4). Such a thin black oxide layer provides minimal protection against rust or corrosion, unless also treated with a water-displacing oil to reduce wetting and galvanic corrosion. From 1944 onwards phosphating/Parkerizing was introduced as a more effective metal surface treatment.

Early Karabiner 98k rifles had walnut wood one-piece stocks. From 1938 onwards the rifles had laminated stocks, the result of trials that had stretched through the 1930s. Plywood laminates are stronger and resisted warping better than the conventional one-piece patterns, did not require lengthy maturing, and were cheaper. The laminated stocks were, due to their dense composite structure, somewhat heavier compared to one-piece stocks. In addition to the use of walnut and beech laminate, elm was used in small quantities. The butts of the semi-pistol grip Karabiner 98k stocks were not uniform. Until early 1940 the stocks had a flat buttplate. After 1940 some stocks had a cupped buttplate. All stocks had a steel buttplate.