One of the greatest psyops of the last few centuries was to convince us with sham science that carbon made the planet heat up. The scientists got caught fixing the data. Al Gore's film was a fraud. But if we dutifully paid this tax all would be well despite China burning dirty old coal. People caught on. Paying the damned tax was surely a wake up call. You can now resume regular programming NOT! Never trust them. They're consummate liars. As Goebbels opined I can turn a circle into a square.

John Williamson is one of my favourite balladeers from down under. He's True Blue. Wipe the dust from your brow, enjoy an Australian lager and veggiemite on a shingle and enjoy the news of the first country to liberate itself from one of the greatest lies ever sold.

Keeper of the Stones https://www.youtube.com/watch?v=g-1HfLpLj3I

Raining On The Rock https://www.youtube.com/watch?v=7IcgPdppG_k

This Is Australia Calling https://www.youtube.com/watch?v=eLhhwvj0uKE

Tony Abbott Pledged to Get Rid of the Tax Last Year

In a vote that could highlight the difficulty in implementing additional measures to reduce carbon emissions ahead of global climate talks next year in Paris, Australia's Senate on Thursday voted 39-32 to repeal a politically divisive carbon emissions price that contributed to the fall from power of three Australian leaders since it was first suggested in 2007.

Australia, the world's 12th largest economy, is one of the world's largest per capita greenhouse gas emitters due to its reliance on coal-burning power stations to power homes and industry. In 2011, daily emissions per head amounted to 49.3 kilograms (108 pounds), almost four times higher than the global average of 12.8 kilograms, and slightly ahead of the U.S. figure of 48.2 kilograms.

The former Labor government, while introducing a price on carbon, said the move would help slash emissions by 160 million metric tons by 2020. It offered voters billions of dollars in compensation through tax breaks and welfare payments for increased costs stemming from one of the most dramatic reforms ever attempted in the energy-reliant economy.

But after the global financial crisis took hold in 2008, followed by the end of a decadelong mining boom in 2012 that slowed growth and employment in the A$1.5 trillion (US$1.4 trillion) economy, Australian voters turned against climate laws—recognized by the International Energy Agency as model legislation for developed countries—blaming them for rising energy bills and living costs. 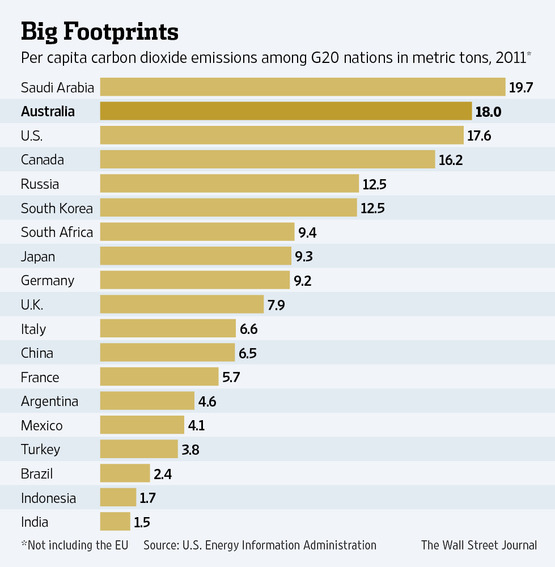 The World Bank in May produced a State and Trends of Carbon Pricing report counting carbon pricing programs in 40 nations and 20 regions worth a collective US$30 billion, while also singling out repeal plans in Australia as one of the biggest international threats to the rollout of similar programs elsewhere, given its example.

Prime Minister Tony Abbott, who made a pre-election "pledge in blood" to voters and business to prioritize growth above climate shift, delivered on his promise after independent senators with deciding votes in the upper house sided with his conservatives, following a power shift this month that ended years of domination by the pro-environment Greens party.

"Today the tax that you voted to get rid of is finally gone, a useless destructive tax which damaged jobs, which hurt families' cost of living and which didn't actually help the environment is finally gone," a jubilant Mr. Abbott told voters in a news conference after the Senate's decision.

He said the carbon price was acting as a A$9 billion a year handbrake on the economy, which was adjusting to the end of a record mining investment boom that helped shield Australia through much of the recent global economic downturn.

Without matching emissions policies in other industrialized countries, Mr. Abbott had said earlier the tax was an unfair shackle on local companies and individuals, unequaled except in Europe, where an emissions market has operated since 2005...