On June 8th, 1965, during the Six-Day War, Israel attacked and nearly sank the USS Liberty belonging to its closest ally, the USA. Thirty-four American servicemen were killed and over 170 wounded in the two-hour assault by Israeli warplanes and torpedo boats.

Israel claimed that the whole affair had been a tragic accident based on mistaken identification of the ship. The American government accepted the explanation. For more than 30 years many people have disbelieved the official explanation but have been unable to rebut it convincingly.

Now, "Dead in the Water" uses startling new evidence to reveal the truth behind the seemingly inexplicable attack. The film combines dramatic reconstruction of the events, with new access to former officers in the US and Israeli armed forces and intelligence services who have decided to give their own version of events. Interviews include President Lyndon Johnson's Secretary of Defense, Robert McNamara, former head of the Israeli navy, Admiral Shlomo Errell, and members of the USS Liberty crew.

Take note of the shell damage

The USS Liberty incident was an attack on a United States Navy technical research ship, USS Liberty, by Israeli Air Force jet fighter aircraft and Israeli Navy motor torpedo boats, on 8 June 1967, during the Six-Day War. The combined air and sea attack killed 34 crew members (naval officers, seamen, two Marines, and one civilian), wounded 171 crew members, and severely damaged the ship. At the time, the ship was in international waters north of the Sinai Peninsula, about 25.5 nmi (29.3 mi; 47.2 km) northwest from the Egyptian city of Arish. 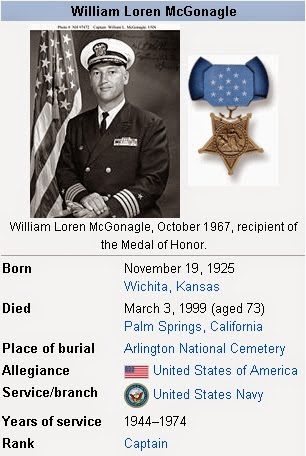 He was the only recipient of the Medal of Honor to receive his medal in a warehouse by the Secretary of the Navy NOT at the White House by the President. There is no mention of Israel in the citation. If I can say there is a hero I respect, it is this man. God bless him.

For conspicuous gallantry and intrepidity at the risk of his life above and beyond the call of duty as Commanding Officer, USS Liberty (AGTR-5) in the Eastern Mediterranean on 8–9 June 1967. Sailing in international waters, the Liberty was attacked without warning by jet fighter aircraft and motor torpedo boats which inflicted many casualties among the crew and caused extreme damage to the ship. Although severely wounded during the first air attack, Captain (then Commander) McGonagle remained at his battle station on the badly damaged bridge and, with full knowledge of the seriousness of his wounds, subordinated his own welfare to the safety and survival of his command. Steadfastly refusing any treatment which would take him away from his post, he calmly continued to exercise firm command of his ship. Despite continuous exposure to fire, he maneuvered his ship, directed its defense, supervised the control of flooding and fire, and saw to the care of the casualties. Captain McGonagle's extraordinary valor under these conditions inspired the surviving members of the Liberty's crew, many of them seriously wounded, to heroic efforts to overcome the battle damage and keep the ship afloat. Subsequent to the attack, although in great pain and weak from the loss of blood, Captain McGonagle remained at his battle station and continued to conn his ship for more than seventeen hours. It was only after rendezvous with a United States destroyer that he relinquished personal control of the Liberty and permitted himself to be removed from the bridge. Even then, he refused much needed medical attention until convinced that the seriously wounded among his crew had been treated. Captain McGonagle's superb professionalism, courageous fighting spirit, and valiant leadership saved his ship and many lives. His actions sustain and enhance the finest traditions of the United States Naval Service.

Still on the bridge with a severe leg injury Captain McGonagle DID NOT GIVE UP HIS SHIP in the finest traditions of the US Navy. 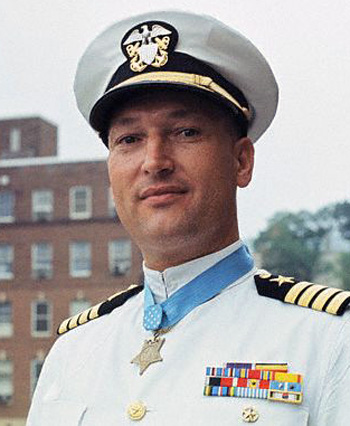 The Navy Yard award for gallantry