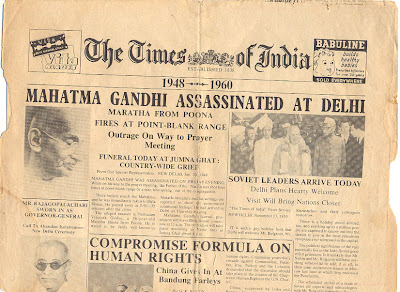 Mohandas Karamchand Gandhi (often called Mahatma Gandhi in India) was assassinated on 30 January 1948, shot at close range by Nathuram Godse. Gandhi was outside on the steps of a building where a prayer meeting was going to take place. He was surrounded by a part of his family and some followers when three gunshots killed him. Prior to his death, there had been five unsuccessful attempts to kill Gandhi, the first occurring in 1934.

After a previous failed attempt to assassinate Gandhi at the Birla House Nathuram Godse and Narayan Apte returned to Pune via Mumbai (Bombay). With the help of Dattatraya Parchure and Gangadhar Dandavate, Nathuram Vinayak Godse and Narayan Apte purchased a Beretta and reached Delhi on 29 January 1948, checking into the retiring room No. 6 at Delhi Railway Station where they chalked out the plan for his assassination.

Godse approached Gandhi on January 30, 1948 during the evening prayer at 5:17 pm. When Godse bowed, one of the girls flanking and supporting Gandhi, Abha Chattopadhyay, said to Godse, "Brother, Bapu is already late" and tried to put him off, but he pushed her aside and shot Gandhi in the chest three times at point-blank range with a Beretta M 1934 semi-automatic pistol chambered in .380 ACP bearing the serial number 606824. Gandhi died almost immediately. Godse himself shouted "police" and surrendered himself. 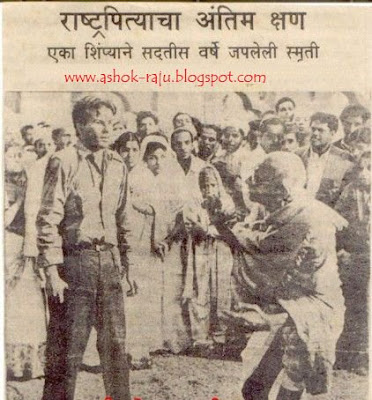 The First Information Report (FIR) filed by Shri Nand Lal Mehta shows that the last words of Gandhi were Hey... Raam (which translates into "Oh God", Ram being one of the Hindu deities). There has been no explanation of why he was not rushed to the hospital and was instead taken to Birla House, where he later died.

...People were standing on both the sides and approximately three feet of vacant space was left for the Mahatma to pass through. As per the custom the Mahatma greeted the people with folded hands. He had barely covered six or seven steps when a person whose name I learnt later as Narayan Vinayak Godse, resident of Poona, stepped closer and fired three shots from a pistol at the Mahatma from barely 2 / 3 feet distance which hit the Mahatma in his stomach and chest and blood started flowing. Mahatma ji fell backwards, uttering "Hey-Raam". Nand Lal Mehta

The last words uttered by Mohandas Gandhi have been a matter of debate. Venkita Kalyanam, former personal assistant to Gandhi, said that he was present at the spot and that Gandhi said "Oh God." His secretary, Pyarelal, quoted his last words as "Ram Ram". Gandhi had given a speech nine months before the assassination saying "Even if I am killed, I will not give up repeating the names of Ram and Rahim, which mean to me the same God." According to Nathuram Godse Gandhi just said "uhhh."

All of those involved in the crime were arrested and tried in a trial that attracted plenty of media attention. Those convicted were either executed or served their complete sentences.

Some of the arrests were high-profile such as the arrest of Vinayak Damodar Savarkar.

The Accused were put on trial at Peterhoff, Shimla which housed the Punjab High Court. Savarkar was acquitted and set free due to lack of evidence. Nathuram Godse and Narayan Apte were sentenced to death by hanging. Gopal Godse was sentenced to life in prison.