How did the Russians get the guidance system in the Cold War era? The answer is obvious. We gave it to them. They put it in a missile platform aimed at us. We would have to be very naive to think there aren't space based weapons. It is a masterpiece on aging with a little history of the space program thrown in. Sometimes the old soldier or pilot has a lot to offer. It is better to be able to think faster based on a more comprehensive skill set than to be able to run faster especially when you're running in the wrong direction. After rolling a few G's myself, amusement park rights seemed to be going in slow motion. Enjoy. 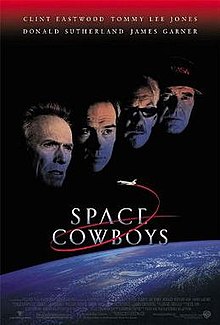 Space Cowboys is a 2000 space drama film directed and produced by Clint Eastwood. It stars Eastwood, Tommy Lee Jones, Donald Sutherland, and James Garner as four older "ex-test pilots" who are sent into space to repair an old Soviet satellite, unaware that it is armed with nuclear missiles.

In 1958, two U.S. Air Force pilots, William "Hawk" Hawkins (Eli Craig) and Frank Corvin (Toby Stephens), are taking a flight in a modified X-plane over a desert, when Hawk decides to try and break a height record in the plane. After going up continually, they reach 112,000 feet, at which the plane stalls and drops into a flat spin, leading them both to eject and crash the plane, both of them narrowly missing hitting a B-50 Superfortress piloted by "Tank" Sullivan (Matt McColm). After landing on the ground after ejecting, they get into a fight, where another soldier, Jerry O'Neill (John Mallory Asher) breaks them apart. When they get back to the air base, the base commander, Bob Gerson (Billie Worley) is disappointed by Hawk's lack of responsibility, and announces that they arrived in time for a press conference. At the conference, Gerson announces that the USAF's involvement with space testing was terminated, and given to NASA. Now present day, IKON, an obsolete Soviet communications satellite is about to fall out of orbit, and NASA is instructed, for political reasons, to capture it, rather than allow it to crash. The on board systems respond, but are so archaic that nobody at NASA understands them. Now retired, Frank (Clint Eastwood), who designed the original Skylab guidance systems from which the Soviet satellite's system had been copied, is asked to help, despite the longstanding animosity between the engineer and project director Bob Gerson (James Cromwell). Meanwhile, NASA engineer Sara Holland (Marcia Gay Harden) argues with project manager Gerson regarding conflicting political and engineering concerns over the decaying satellite.

Corvin, initially unwilling to work with Gerson, insists that there is not enough time to train anybody. He proposes to go himself, and he will not go without his old team, 'Team Dædalus': Jerry (Sutherland), Hawk (Jones), and Tank (Garner). Gerson agrees, intending to string Corvin along until younger astronauts are up to speed on the system. The press later learns of the situation and the four men become celebrities, which leads to the political head of NASA, the Vice President, demanding that they be sent on the mission. 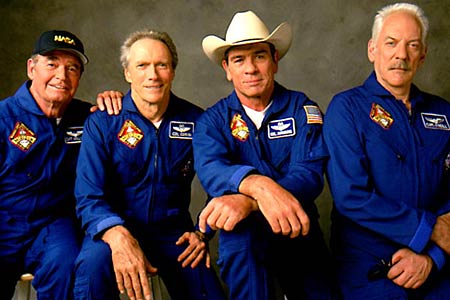 Competitive rivalry between the young astronauts and Team Dædalus continues, while Holland grows fond of Hawkins. During medical tests, Hawk is found to have terminal pancreatic cancer, and has only about eight months left to live. Due to the urgent nature of the mission and since his illness would not impair his effectiveness on the mission, he is deemed flightworthy.

The mission goes ahead with two crews, old and new, flying the space shuttle, which is also named Dædalus. As they approach the satellite, however, they become suspicious when the satellite reacts to their scans. Upon closer investigation, the team discovers that it is armed with six nuclear missiles, a dangerous and still active relic of the Cold War and a violation of the Outer Space Treaty. The team also learns that the system the satellite uses (from Skylab) was allegedly stolen by the KGB from Gerson's personal files. It is implied that Gerson has prior dealings with the Russians and the confession was to protect Gerson from treason charges. Furthermore, the satellite is programmed to launch its payload at predetermined targets should it be allowed to fall out of orbit. To prevent the global catastrophe that would ensue, the team decides to use the payload-assist rockets that the shuttle is carrying in order to push the satellite out of Earth orbit into deep space.

However, Ethan Glance (Loren Dean), one of the younger astronauts, follows Gerson's secret orders to try to move IKON into a stable orbit by himself. He connects the PAM rockets against Corvin's orders, accidentally activating the satellite, and is incapacitated in the process. It collides with the shuttle, causing extensive damage. Roger Hines (Courtney B. Vance), one of the mission specialists, is also seriously injured in the collision, leaving the four senior astronauts to handle the crisis as the nuclear missile-laden satellite continues to fall from orbit.

Corvin and Hawkins deactivate the satellite. They then discover that there are not enough undamaged rockets to stabilize its now rapidly deteriorating orbit. With time running out, they decide to use the satellite's own missiles' rockets to push it away. There is one hitch: somebody has to go along to manually launch the missiles at the right time to ensure they do not enter an Earth-bound trajectory. Hawk makes the choice to complete the suicide run, reasoning that he is the best pilot of the group and is dying anyway. He aims for the Moon, his lifelong ambition.

Meanwhile, the rest of the crew on the shuttle are not out of danger. The shuttle's computers are not responding and most of the propulsion systems are damaged. NASA controllers decide to have the crew bring the shuttle as low as possible, then abandon ship and let it crash into the ocean. Corvin performs a de-orbit burn successfully as the space shuttle re-enters the atmosphere. Corvin makes it safely through, and flies to Florida, where he has Jerry see that the younger astronauts have safely parachuted out. Tank refuses to leave Corvin on the shuttle, as does Jerry. Corvin manages to land the shuttle at the Shuttle Landing Facility at Kennedy Space Center, duplicating Hawk's previous performance in a shuttle simulator.

Later, Corvin and his wife Barbara (Barbara Babcock) stand by their home and stare at the moon, contemplating whether Hawk has made it there. As their Earth-bound view of the moon fades into a nearer image of the moon, the Frank Sinatra song "Fly Me to the Moon" is heard. In a viewpoint sweeping close across the surface of the moon, wreckage from IKON and Hawk's body are seen. Hawk is lying in a slightly reclined sitting position against a rocky outcrop where he had apparently dragged himself from the wreckage. As the view comes closer, the Earth is seen reflected in Hawk's golden sun visor. 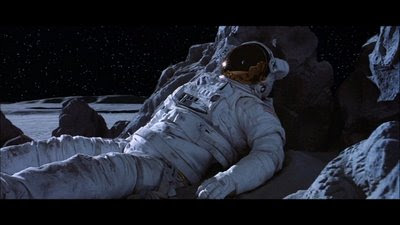