CONSPIRACY NIGHT AT THE MOVIES: The Parallax View

There was never a better film on the science and techniques of assassination. Within we see a company that recruits Manchurians. We see an assassination and the use of the patsy. We see witnesses murdered. We see a 'Commission' to state there is NO CONSPIRACY. We see the stadium sniper operation and the plane bomber technique. A plane was just lost over Vietnam. It disappeared without a trace. The techniques are new to the uninitiated, but quite old to followers of this forum. ENJOY this ultimate classic conspiracy film. The Parallax View is a 1974 American dramatic thriller film directed and produced by Alan J. Pakula, and starring Warren Beatty, Hume Cronyn, William Daniels and Paula Prentiss. The film was adapted by David Giler, Lorenzo Semple Jr and an uncredited Robert Towne from the 1970 novel by Loren Singer. The story concerns a reporter's dangerous investigation into an obscure organization, the Parallax Corporation, whose primary, but not ostensible, enterprise is political assassination. 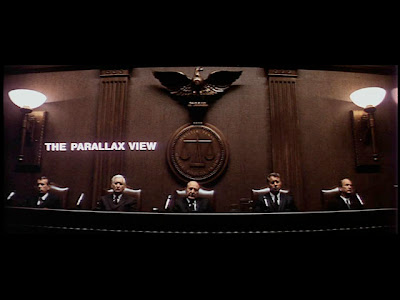 TV newswoman Lee Carter (Paula Prentiss) is one of many witnesses to the public assassination of presidential candidate Senator Charles Carroll (Bill Joyce) atop the Seattle Space Needle. A waiter armed with a revolver is chased but falls to his death. Meanwhile, a second waiter, also armed, leaves the crime scene unnoticed. A Congressional special committee determines that the assassination was the work of a lone gunman.

Three years later, Carter visits her former boyfriend and colleague, newspaper reporter Joe Frady (Warren Beatty). Lee tells Frady that she feels there is more to the assassination than was reported at the time. Six of the witnesses to Carroll's assassination have since died, and she fears she will be next. Frady does not take her seriously. Not long afterwards, Carter is found dead and her death is judged by the police to be either a voluntary or accidental drug overdose.

Investigating Carter's leads, Frady goes to the small town of Salmontail whose sheriff, L.D. Wicker (Kelly Thordsen), attempts to trap him below a dam while the floodgates are opening. Frady narrowly escapes but the sheriff drowns. Frady finds information about the Parallax Corporation in the sheriff's house and learns that its real business is recruiting political assassins.

As Frady interviews Austin Tucker (William Daniels), Carroll's former aide, aboard Tucker's boat, a bomb explodes. Frady survives but is believed dead, and he decides to apply to Parallax under an assumed identity. Jack Younger (Walter McGinn), a Parallax official, assures Frady that he is the kind of man they are interested in. Frady is accepted for training in Los Angeles, where he watches a slide show that conflates positive images with negative actions.

Frady recognizes a Parallax man from a photo that Austin Tucker showed him: the Parallax Assassin was a waiter in the Space Needle restaurant the day Senator Carroll was murdered. He follows the Parallax Assassin and watches him retrieve a bag from the trunk of a car, then drive to an airport (the scenes were shot at Bob Hope Airport) and check it as baggage on a plane. Frady boards the plane himself. He notices a Senator aboard, but not the Parallax man. Frady writes a warning on a napkin and slips it into the drink service cart. The warning is found and the plane returns to Los Angeles. Everybody is evacuated moments before a bomb explodes on the plane. 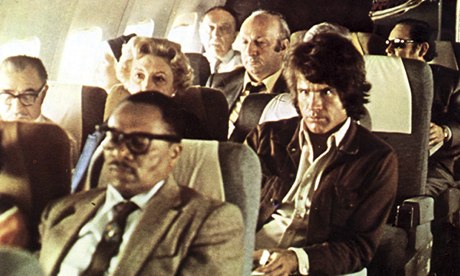 Frady's generally skeptical editor Bill Rintels (Hume Cronyn) listens to a secretly recorded tape of a conversation Frady had with Jack Younger. Rintels finishes with the tape and places it in an envelope, apparently with other such tapes. The Parallax Assassin delivers coffee and food to Rintels' office. Rintels is poisoned and the tapes disappear.

Frady follows the Parallax associates to the dress rehearsal for a political rally for Senator George Hammond (Jim Davis). Frady hides in the auditorium's rafters to secretly observe the Parallax men, who are posing as security personnel. Frady realizes too late he has been set up as a scapegoat, and Hammond is shot dead by an unseen gunman. As Frady is trying to escape, he is seen in the rafters and a Parallax agent kills Frady with a shotgun.

The same committee that determined a lone gunman killed Senator Carroll now reports that Frady, acting alone, killed Senator Hammond. The committee further expresses the hope that their verdict will end political assassination conspiracy theories. They do not take questions from the press.