Another rescue mission from our disc the October 8, 2009 show with Timothy Spearman. What a lot of material we covered. How we forget pressing issues like the loss of $1 Billion from Ontario's E Health debacle. How the government covered up for pedophiles and torturers. Hmm? Enjoy this blast from the past.

Former Japanese Finance Minister found dead, did he warn the world about the G7 at the Rome meeting by setting off the alarm at the Vatican museum touching the statue of Laocoon the original sentinel of the Trojan ploy, Japanese PM deploys a gold tie at the G20 heralding the shift to gold, the Cafe sets the way to safeguard your wealth with Bullion Mart, the Video Music Awards invoke a prayer to the dark Lord Satan, body bags delivered to Toronto area hospitals, the moon is shot, Canwest Global falls, Robert Redford's The Castle trains you to overthrow the Dark Lord from inside the gates. Conspiracy Cafe is the source to see within the Trojan Horse.

Was Shoichi Nakagawa warning the world about globalization a trojan horse? Was he a modern day Laocoön put to death for his efforts? 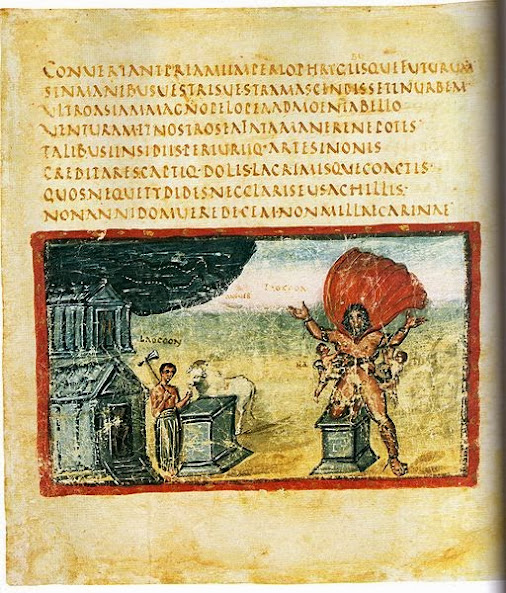 Death of Laocoön from the Vatican Vergil.

The most detailed description of Laocoön's grisly fate was provided by Quintus Smyrnaeus in Posthomerica, a later, literary version of events following the Iliad. According to Quintus, Laocoön begged the Trojans to set fire to the horse to ensure it was not a trick. Athena, angry with him and the Trojans, shook the ground around Laocoön's feet and painfully blinded him. The Trojans, watching this unfold, assumed Laocoön was punished for the Trojans' mutilating and doubting Sinon, the undercover Greek soldier sent to convince the Trojans to let him and the horse inside their city walls. Thus, the Trojans wheeled the great wooden Horse in. Laocoön did not give up trying to convince the Trojans to burn the horse, and Athena makes him pay even further. She sends two giant sea serpents to strangle and kill him and his two sons.[7] In another version of the story, it was said that Poseidon sent the sea serpents to strangle and kill Laocoön and his two sons.

The death of Laocoön was famously depicted in a much-admired marble Laocoön and his Sons, attributed by Pliny the Elder to the Rhodian sculptors Agesander, Athenodoros, and Polydorus, which stands in the Vatican Museums, Rome. Copies have been executed by various artists, notably Baccio Bandinelli. These show the complete sculpture (with conjectural reconstructions of the missing pieces) and can be seen in Rhodes, at the Palace of the Grand Master of the Knights of Rhodes, Rome, the Uffizi Gallery in Florence and in front of the Archaeological Museum, Odessa, Ukraine, amongst others.