STAR TREK S1 EP21 The Return of the Archons

This was a classic episode. We are all victims of FESTIVAL. Try not to celebrate the assigned day for one. You are definately swimming upstream. I got myself out of the trap years ago. However, with even those in the know, the programming goes deep. They can't help themselves. We are BIG on ritual. It is obvious when you look from a distance. Imagine Christ looking at Christmas and wondering what we were doing? It's all made up to keep us in check these FESTIVALS. I'm the resistance. I'll swim upstream. 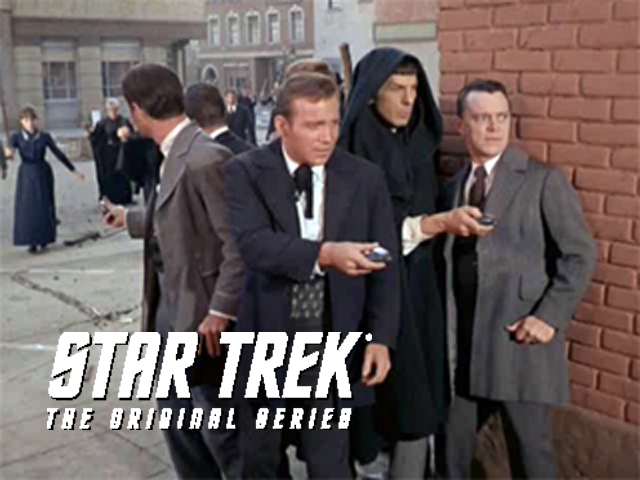 For English click on the little head. It's the second option.

"The Return of the Archons" is a first season episode of the original American science fiction television series Star Trek. It is episode #21 and was first aired February 9, 1967. It was repeated by NBC on July 27, 1967. The screenplay was written by Boris Sobelman, based on a story by Gene Roddenberry, and directed by Joseph Pevney. This episode contains Star Trek's first reference to the Prime Directive.

Set in the 23rd century, the series follows the adventures of Captain James T. Kirk (William Shatner) and the crew of the Federation starship Enterprise. In this episode, the crew of the Enterprise encounters a seemingly peaceful world controlled by an unseen religious leader, but discovers that the end of social evils has removed everyone's individuality. When the ship comes under attack, Kirk and crew must destroy the source of the attack even if it means returning the planet to a violent and war-like state. On stardate 3156.2, the Federation starship USS Enterprise, under the command of Captain James T. Kirk (William Shatner), arrives at the planet Beta III in the C-111 system where the USS Archon was reported lost nearly 100 years earlier.[5] Lt. Sulu (George Takei) is the only member of the landing party who beams up from the planet's surface, and exhibits strange behavior. Kirk beams down with another party to investigate. They find the inhabitants living in a static, 19th-century Earth-style culture, with little or no individual expression or creativity. The entire culture is ruled over by cloaked and cowled "Lawgivers", controlled by a reclusive dictator known as Landru (Charles Macaulay). The landing party has arrived at the start of "Festival", a period of violence, destruction, and sexual aggressiveness which apparently is the only time Landru does not exercise control over the Betan populace.

Kirk's landing party seeks shelter from the mob at a boarding house owned by Reger (Harry Townes), A friend of Reger's suspects that the visitors are "not of the Body" (the whole of Betan society), and summons Lawgivers. The Lawgivers kill Reger's friend, Tamar (Jon Lormer), for resisting the "will of Landru". When the landing party refuses to do as the Lawgivers say, the Lawgivers become immobile and Reger leads the Enterprise landing team to a hiding place. Reger reveals that Landru "pulled the Archons down from the skies". Contacting the ship, Kirk learns that heat beams from the planet are attacking the Enterprise, which must use all its power for its shields. Its orbit is deteriorating and it will crash in 12 hours unless the beams are turned off.

A projection of Landru is projected into the hiding place, and Kirk and his team are rendered unconscious by ultrasonic waves and captured. The landing party is imprisoned in a dungeon, and Dr. Leonard McCoy (DeForest Kelley) is "absorbed into the Body" and placed under Landru's mental control.[8] Kirk is taken to a chamber full of high technology, where he is to be "absorbed". But Marplon (Torin Thatcher), one of the priests of Landru who is immune to Landru's control, rescues him and Spock (Leonard Nimoy). Returning to the dungeon, Reger and Marplon tell how Landru saved their society from war and anarchy 6,000 years ago and reduced the planet's technology to a simpler level.

McCoy summons the Lawgivers to "absorb" Kirk and Spock, who subdue them and don their robes. Marplon takes Kirk and Spock to the Hall of Audiences, where priests commune with Landru.[9] A projection of Landru appears and threatens Kirk, Spock, and all Betans who saw the landing party with death. Kirk and Spock use their phasers to blast through the wall and expose the truth: the reclusive Landru is actually a computer. The computer neutralizes their phasers. Kirk argues with the machine, telling it that it has destroyed the creativity of the people—killing "the Body". Concluding that the computer's prime directive is to destroy evil, Kirk forces the computer to self-destruct, freeing the people of Beta III.

The heat beams stop, and the Enterprise is saved. Kirk agrees to leave Federation advisors and educators on the planet to help the civilization advance, free of Landru's dominance.