This revolver was used in British service from 1886. It is generally found in the .455 caliber. Pre 1898 guns in certain calibers are classified as antiques for collection purposes.

This revolver was used in British and Canadian service in the WWI era. It was a very robust revolver and a lot of fun to shoot.  In the Commonwealth the .455 caliber was the common caliber. It was found in others for civilian use.

This was America's back up service pistol for WWI. The Colt Model 1911 was the official pistol in .45ACP. They couldn't make them fast enough. So both Colt and Smith & Wesson made a revolver in that caliber. The .45ACP was a rimless cartridge so special clips were made to hold the automatic pistol bullets. 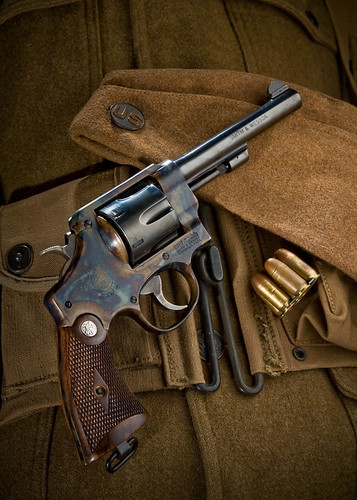 This revolver came in a myriad of calibers. It was the official cowboy gun of the 19th century although many other makes and models were used. It is highly valued as a collector's piece mostly because of Hollywood. It was made starting in 1873. It's major flaw was it was a side loading (one at a time) pistol. The British and Smith and Wesson were using top break pistols where all the cartridges could be ejected at once and reloaded more quickly. In the 19th century the citizen was a central authority in the so called democratic countries. The right to bear arms was established in the Bill of Rights of 1689 in England after the INQUISITION! They don't really teach you that in the lib left thought processing centers we call schools. A little time on the rack can work to get the point understood. Some of these revolvers before 1898 are antiques.

In 19th century revolvers there were no safety features that we have today. When using these firearms keep the chamber under the hammer empty. Modern guns have a hammer blocking safety to prevent the firing pin from striking a cartridge. Remember your safety rules. Always point a firearm in a safe direction. Treat every firearm as loaded. There was a day when the citizen was manifest. That day is being taken away from us. There was a concept called Noblisse Oblige. It is not taught in the mind control academies we call schools. We are indoctrinated into a form of slavery with the buzzword of the NWO change. It isn't change. It is a return to bondage. There was a day when the telescreen wasn't all about drug dealers and the less than stellar role models leading youth to Satan. Roy Rogers and Dale Evans were a pair. They still can be. They were models of a different era. The citizen had freedom and decency. They also had the Second Amendment and firearms. Both go hand in glove. Make the liberal left nervous. RESIST the mind control tactics they use. Stick to your guy or girl. Stick to your guns. Use the term RESTORATION not change. Take a giant leap backwards to the level of freedom they desire to remove WE THE PEOPLE. Learn their tricks and be wary of them. Not only is it your right; it is your DUTY!