CONSPIRACY NIGHT AT THE MOVIES: Paul Walker - Eight Below 2006

This is a classic Disney film. If you love dogs, you'll love this. Was Paul Walker murdered for something he knew? We may never know for sure. We can appreciate this film though. 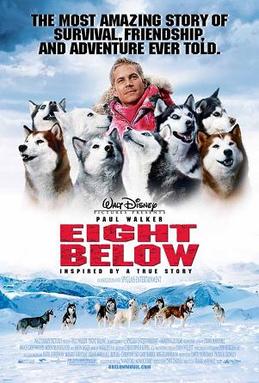 Eight Below is a 2006 American adventure drama film directed by Frank Marshall and written by David DiGilio. It stars Paul Walker, Bruce Greenwood, Moon Bloodgood, and Jason Biggs. It was released theatrically on February 17, 2006, by Walt Disney Pictures in the United States.

In 1993 Jerry Shepard (Walker) is a guide at an Antarctica research base under contract with the National Science Foundation. UCLA professor, Dr. Davis McClaren (Greenwood), arrives at the base and along with Shepard's boss, Dr. Andy Harrison (Gerard Plunkett), presses Shepard to take McClaren to Mount Melbourne to attempt to find a rare meteorite from the planet Mercury. Shepard does so, ignoring his own intuition, which tells him it is too late in the season (January) to complete such a treacherous route. Worried about the snowmobiles breaking through the thinning ice or falling into a crevasse, Shepard tells Harrison and McClaren that the only way to get to Mount Melbourne is by dog sled.

Shepard and McClaren make it to Mount Melbourne, but immediately are called back to base camp due to an approaching heavy storm. McClaren begs for more time, and Shepard gives him half a day. McClaren finds what he was looking for and the two head back to the sled.

Shepard pauses to patch up one of the dogs (Old Jack) whose paw is bleeding. McClaren, while walking around to get a better radio connection with base, slides down an embankment when a soft ledge gives way. His landing at the bottom cracks the thin ice and McClaren ends up breaking through. Shepard is able to get his lead dog Maya to take a rope to McClaren and the dog team pulls him from the water. Now, as they battle hypothermia, frostbite, and near whiteout conditions, Shepard and McClaren have to rely on the dogs' stamina and keen sense of direction to get them back to base. The injured people are immediately evacuated, along with all other personnel, due to the storm, which is expected to intensify. With too much weight in the plane to carry both people and dogs, the human team medically evacuates Shepard and McClaren with a plan to return later for the dogs. The dogs are temporarily left behind, but the storm is worse than expected. Because of the harsh weather conditions and a shortage of supplies at the McMurdo Station, it soon becomes apparent that no rescue will be attempted until the next spring.

Back at home, Shepard is guilt-ridden about leaving his dogs and stops working as an Antarctic-conditions guide. Five months later, and after a heart-to-heart session with an older, veteran guide, Shepard decides to throw his all into rescuing the dogs. Before leaving for the trip, Shepard patches things up with McClaren and shares his intention to rescue the dogs. McClaren learns Shepard does not have enough money to pay for the trip but tells him that he cannot help him. Soon afterwards, McClaren sees a drawing of the dog team made by his young son, with the title: "My Hero is... THE DOGS WHO SAVED MY DADDY." McClaren realizes the magnitude of his ingratitude and uses the remaining balance of his grant money to finance a rescue mission.

Four days after the dogs were left at base camp, they eventually break free of their chains, except for Old Jack. Old Jack, who's too old to go with the others on their journey, dies at the base camp, despite Maya's encouragement to break free. The dogs now begin hunting seals, sea gulls, and penguins in order to keep from starving. However, one night while looking at the southern lights, one of the dogs, Dewey, falls off a steep slope and is fatally injured. The dogs show their affection for their teammate, but after Dewey succumbs to his injuries and dies, the dogs eventually have to move on. The youngest dog, Max, stays with Dewey a little longer and is separated from the rest.

Max finds his way back to where McClaren fell into the ice earlier and spots a dead Orca. He eats from it until he is attacked by a nearby leopard seal that fiercely guards its meal. The other dogs also find their way to the dead Orca and Max gets the leopard seal's attention so the rest can eat. But the leopard seal quickly sees what's happening, bites Maya on the leg and nearly kills her. Max and the other dogs fiercely chase him off. Maya manages to survive, but her leg is seriously injured.

The rest of the pack continue to hunt for food. Maya refuses food brought for her, and gives pack leadership to Max, who has shown bravery, leadership, and compassion.

The dogs manage to find their way close to the base camp, where Shepard and his rescue team are arriving. Shepard and the five dogs have a happy reunion. When Shepard gets ready to go in the car to leave, Max refuses to go. Max leads Jerry to the injured Maya, and he is able to rescue her as well. The team then leaves the base to return home with the six dogs. The final scene shows a grave for Old Jack and Dewey.