CONSPIRACY NIGHT AT THE MOVIES: Battle Beneath The Earth [1967] 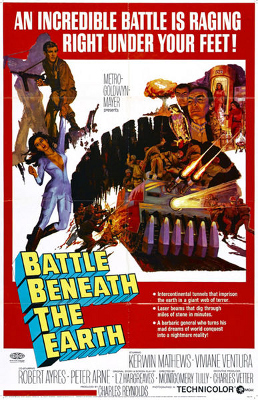 Battle Beneath the Earth (1967) is a British spy film starring Kerwin Mathews. It was released by Metro-Goldwyn-Mayer. The film also features character actor Ed Bishop, who later went on to star in the Gerry Anderson cult-TV show UFO.

The plot involves rogue elements of the communist Chinese army who use fantastic burrowing machines in an effort to place atomic bombs under major U.S. cities. The U.S. Navy sends troops underground to combat them. The film has been described as "deliriously paranoid".