We had a lot of trouble with this video when we first used it two years ago. There is a fresh copy on line. It is important as a training resource to let you see first hand what life will be like. Harry makes several key mistakes. The greatest one is not unifying with the hardware store owner he stole from. Together they would have fared better. He was very wise to use the cave. The shelter you prefer will be a major target. Use it as a trap lure bandits not a residence. You see what happened to those who didn't know. You will need a guard 24/7. That is why co-operation with people is necessary. You may have to deal with violent criminals. That will not be easy. Many issues are raised. It is better to see them in film than live them. Good Luck. God Bless. Panic in Year Zero!, sometimes known as End of the World, is a 1962 science fiction film directed by and starring Ray Milland. The original music score was composed by Les Baxter. It was written by John Morton and Jay Simms. Although the similarities to Ward Moore's stories Lot (1953) and Lot's Daughter (1954) are obvious, Moore received no credit for the film. In the 1962 novelization of the film by Dean Owen, which was published under the title End of the World by Alta Vista Productions with Ray Milland's photo on the cover, the introduction page asserted: "The screenplay was by John Morton and Jay Simms, from an original story by Jay Simms."

Soon after Harry Baldwin (Ray Milland), his wife Ann (Jean Hagen), their son Rick (Frankie Avalon), and daughter Karen (Mary Mitchell) leave suburban Los Angeles on a camping trip, the Baldwins note unusually bright light flashes coming from a great distance. Sporadic news reports on CONELRAD broadcasts hint at the start of a thermonuclear war, which is confirmed as the Baldwins see a large mushroom cloud over what was Los Angeles.

The family initially attempts to return to rescue Ann's mother near Los Angeles, but soon abandons these plans as panicked refugees climb over one another to escape the fallout from the multiple nuclear explosions. Witnessing the threads of society being torn apart, Harry decides that the family must find refuge at their secluded vacation spot. 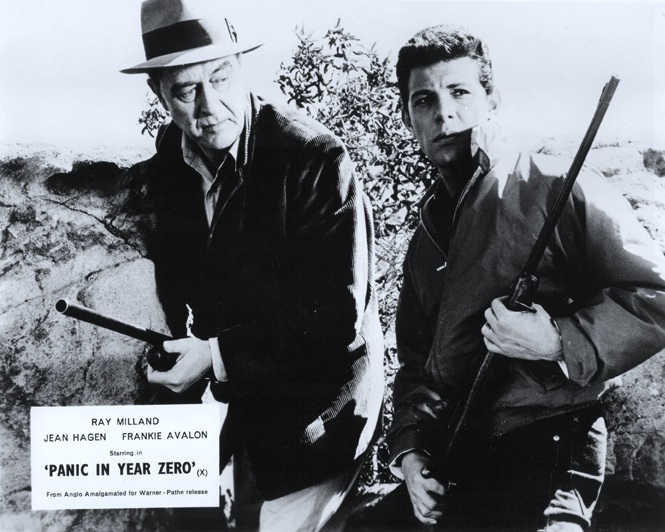 Along the way, they stop to buy supplies, or, in the case of hardware store owner Ed Johnson (Richard Garland), take them by force when he won't accept a check. They also encounter three threatening young hoodlums, Carl (Richard Bakalyan), Mickey (Rex Holman), and Andy (Neil Nephew), on the road, but manage to drive them off.

After a harrowing journey, the Baldwins reach their destination, finding shelter in a cave while they wait for order to be restored. They find that Johnson and his wife are their neighbors - but not for long. The three thugs appear and shoot them. A farming couple suffers the same fate and their teenage daughter, Marilyn (Joan Freeman) is kept as a sex slave. Karen is also raped when Mickey and Andy happen upon her. With guns in hand, the Baldwin men fight back, killing the two murderers and freeing Marilyn. When Carl returns, he is killed as well, but Rick is seriously wounded.

With Marilyn's help, they get the young man to Doctor Strong (Willis Bouchey). The doctor does what he can, but the boy needs to get to an army hospital over a hundred miles (160 km) away for a blood transfusion or he will die. On their drive there, they encounter a military patrol, scouting for the army that is reestablishing order. After a tense meeting, they are allowed to continue.